Sunday, July 5
You are at:Home»News»Sarawak»Mawan in a Catch-22 situation 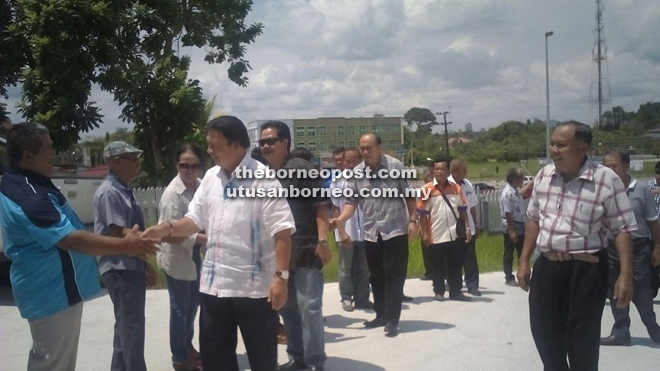 Mawan, who was re-elected Pakan assemblyman during the May 7 state election, described the dilemma as ‘pleasant’ because whatever decision he would make would complement state Barisan Nasional (BN).

The former Teras president pointed out that he did not have the locus standi to direct his former comrades in Teras on what to do but he observed that they were still intact.

“There is no question that Teras members are re-grouping. I noticed that they are still intact and the party is still in existence,” he said when met here yesterday.

When pressed further, Mawan admitted that he met former party comrades when they paid him a courtesy call at the Saratok Resthouse on Sunday afternoon in his capacity as MP.

He said he was visiting his parliamentary constituency when the party members comprising former councillors, community leaders and businessmen met up with him.

He pointed out that they had planned the courtesy call a month ago.

“I met them and I listened to them. From what I have heard some expressed disappointment over the latest political development involving appointments in the local government or various authorities. However, they are happy to point out that they are BN staunch supporters – now and before the state election,” he said.

“My former comrades want me to rejoin Teras but I have applied to join PBB. I am now in a Catch-22 situation but personally I find this a pleasant dilemma because whichever way it goes, we are all true blue BN members. Either way it will complement BN, it will complement the Chief Minister who is also state BN chairman,” Mawan stressed.

Mawan said the Teras members had a point in asking him to rejoin the party – using United People’s Party’s (UPP) case as precedent.

Like Mawan and nine others, UPP chairman Dato Sri Wong Soon Koh resigned from his party and party post to become direct BN candidate in the May 7 state election.

“They (Teras members) were asking why Wong Soon Koh and Tiong Thai King are allowed to rejoin UPP but not me (rejoining Teras). They are saying that they have a case and they will be using UPP’s case as precedent,” said Mawan.

He hoped Teras members would give him a little more time to sort things out.

Mawan founded Sarawak Progressive Democratic Party (SPDP) in 2002 and became its president but left the party to join Teras in May 2014 following a leadership crisis in SPDP.

The former senior state minister is the only pro-government politician holding two posts – as MP and state assemblyman.

Previous ArticleConcern over hike in number of kidney patients
Next Article Right time to create 13 new state seats, in view of population increase in several areas in Sabah — Upko