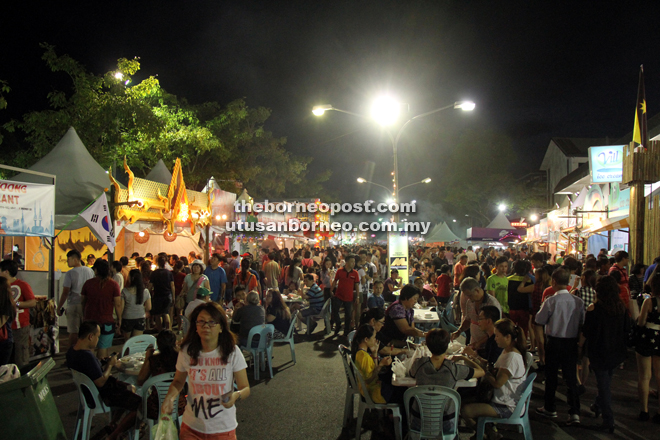 People pack the Kuching Festival ground to have a good time over good food and entertainment. — Photo by Chimon Upon.

KUCHING: One of Sarawak’s most popular and significant festivals, Kuching Festival Food Fair, has attracted nearly 200,000 people since it opened on July 29.

Kuching South City Council (MBKS) mayor Datuk James Chan said the wet weather even failed to deter the 28,000 visitors to the first night of the festival.

“The festival continues to receive overwhelming response and support from the public. Feedback from the ground is really positive,” he said after receiving a courtesy call from officials of Samling Group yesterday.

“Last year, we had about 800,000 visitors to the fair. We aim to break that record this year. We already have nearly 120,000 visitors in the first weekend.

“Several stalls were in fact closed as early as 8.30pm during the weekend because they have sold out all their food,” he said.

The council, the organiser of the highly anticipated festival, Chan assured had always emphasised on learning and making every effort to improve in all aspects so as to create a vibrant and exceptional people-centric event.

“We are genuinely for the people and serving the people. We want to create a good atmosphere to support the business community participating in the festival and bring people together to have a good time.

“Moreover, people don’t have to go to the festival specifically for food, but they can bring along their children to enjoy the entertainment and amusement as well,” he added.