Sunday, May 9
You are at:Home»Columns»Perspective»Hungry ghosts and hungrier men 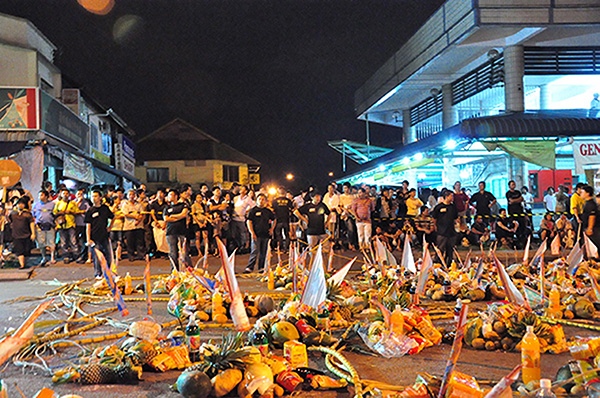 THIS month is the seventh month on the Lunar Calendar. In Chinese culture, the whole month is considered as the Ghost month. So, don’t be surprised if things are a bit quieter during this period: the more adventurous activities are avoided while celebrations, especially weddings, are put on the backburner.

The 15th day of this month is called Ghost Day. It is believed that on that day the portals linking the underworld and the realm of the living are open. In deference to the virtue of filial piety, many Chinese descendants make a point of preparing ritualistic food offerings, burning incense and joss paper, papier-mache form of material items such as clothes, gold and other fine goods for the visiting spirits of their ancestors.

That’s well and good for the spirits who have filial descendants to venerate them. However, there are some unfortunate souls who have no one to honour them or, sadly where their families no longer remember them. These poor spirits are reduced to fighting for the leftover food offerings after the designated parties have finished with them. Obviously their antics and manners leave much to be desired. I remember when we were kids and forgot our table manners and rushed for the food at dinners our elders would scold us. “Don’t be like the mid-seventh month ghosts,” they used to admonish us.

Understandably these hungry ghosts feeling unappreciated would become disgruntled and could very well be up to mischief during their short sojourn in the living world. In fact, someone posted a list of 30 things not to do on the 15th of the seventh month – things that might attract the attention of the hungry ghosts. Personally I think it is just a lot of baloney but to be on the safe side I would not hang out late on that night as advised.

However, while these hungry ghosts might be a nuisance, it is only for a short 12 hours. So I am not too concerned about them. Hungry men on the other hand, are a different proposition altogether. They are insatiable and the impact of their deeds are long lasting. History is replete with tragedies and mishaps consequent of deeds of these men’s pursuits of their insatiable hunger. Their escapades defy logic.

Of late we hear a lot of allegations of men who hunger for so much wealth that they are prepared to move heaven and earth to get their billions. Until these last few years, we seldom spoke of billions and thus many of us do not quite know how many zeros are there in a billion. Well, in my quick research I found out that the traditional European billion has 12 zeros, representing one million million. However, the more toned-down and manageable American version that shows only nine zeros (1,000 million) is now the norm. Even so, it is a huge number.

I have difficulty in visualising what one billion dollars would look like. So I did a quick calculation (and nearly busted my calculator). I found out that the height of a stack of 1,000,000,000 (one billion) 10-dollar bills measures about 10km high. That would put it as high as over 22 times that of the Petronas Twin Towers (the towers stand at 450 metres high).

Now here comes the philosophical question: why would someone want a billion? Tens or even hundreds of millions I can understand but a thousand million? It is not as if being a billionaire would make one 1,000 time happier than a millionaire. And how long would it take one to run down that ginormous amount of money? I reckon it would take a shade under 100 years (that is if one were to blow away one million per month). Indeed, the mind boggles.

I was pondering over this conundrum when I came across this Zen story. It tells of an emperor coming out of his palace for his morning walk when he met a beggar. He asked the beggar, “What do you want?”

“You are asking me as though you can fulfil my desires!” laughed the beggar.

The king was offended and said, “Of course I can fulfil your desire. What is it? Just tell me. I will fulfil anything you ask. I am a very powerful emperor, what can you possibly desire that I cannot give to you?”

“You see this begging bowl? Can you fill it with something?” said the beggar.

“Of course!” said the emperor and called one of his ministers and told him, “Fill this man’s begging bowl with money.”

The minister went and got some money and poured it into the bowl and it disappeared. And he poured more and more, but the moment he poured the money into the bowl, it would disappear and the begging bowl remained always empty. By and by the news spread throughout the whole capital, and a huge crowd gathered. The prestige of the emperor was at stake.

He said to his ministers, “If the whole kingdom is lost, I am ready to lose it, but I cannot be defeated by this beggar.”

So, diamonds, pearls, emeralds and all kinds of precious stones were poured into the begging bowl. Everything that was put into it just disappeared. The begging bowl seemed to be bottomless. The emperor’s treasuries were becoming empty. Finally, it was the evening and the people were standing there in utter silence.

In defeat the emperor dropped at the feet of the beggar and said, “Just tell me one thing. You are victorious – but before you leave, just fulfil my curiosity. What is the begging bowl made of?”

The beggar laughed and said, “There is no secret, it is simply made up of human desire. If a man loses his moral compass his desire will become insatiable and be as bottomless as this bowl.”

As the traditionalist Chinese commemorate the Hungry Ghosts Night, they are comforted by the belief that hungry ghosts are contented with having their fill just for the one night and will retreat back to their underworld when the night is over. Hungry men with insatiable desires are … hmm … a different kettle of fish.