Saturday, October 31
You are at:Home»News»Sarawak»Coalition wages war against dengue in nine areas in four states 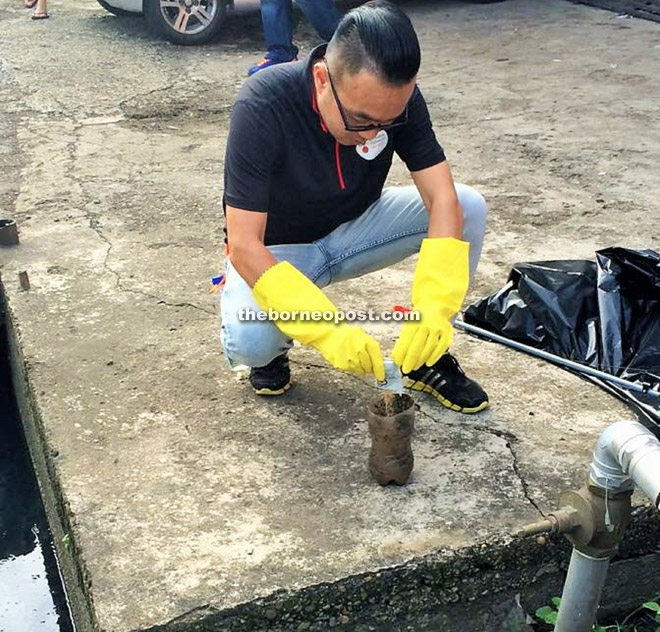 A Dengue Warrior taking part in the ‘Spot, Tag and Clean’ initiative to identify dengue breading ground in public areas.

SIBU: The Allied Against Dengue (AAD, or ‘Bersama Melawan Denggi’) coalition embarked on a ‘Walk and Clean’ campaign at nine identified dengue outbreak areas across the nation yesterday in a united effort to reduce the impact of dengue.

The campaign, which was part of the lead-up to ASEAN Dengue Day on Sept 24, was deployed across Selangor, Perak, Penang and Sarawak which have shown an increase in dengue cases. Since the beginning of this year, Selangor has recorded the highest number of dengue cases at 35,555 cases, followed by Perak (2,490), Penang (1,977) and Sarawak (1,791).

More than 500 volunteers from AAD coalition partners and Dengue Warriors participated in the ‘Spot, Tag and Clean’ initiative with the objective of clearing Aedes mosquito breeding habitats in public areas, according to a press release.

They used AAD flags to mark spots in need of further extensive cleaning for local state health departments and authorities to undertake fogging and larvicide extermination.

Since it was founded in April, the AAD coalition has leveraged their resources and expertise to educate the public how to combat dengue as well as to strengthen first-line surveillance at grassroots-level, including conducting ‘Train-the-Trainers’ sessions and holding educational roadshows to spread awareness within local communities.

“We are encouraged to see the number of dengue cases in Malaysia has dropped to about 65,000 cases between Jan 1 and July 30 this year as compared with over 70,000 cases during the same period last year; this further proves that AAD is on the right path in combating dengue together with the Ministry of Health (MOH) Malaysia, AAD coalition partners, and Dengue Warriors,” said Stacy Wallace, general manager of GlaxoSmithKline (GSK) Consumer Healthcare for Malaysia.

She noted that mosquito-borne diseases like dengue cannot be easily eradicated and that without a cure, public empowerment is the only measure to combat dengue.

She highlighted that the spirit of volunteerism evident in the ‘Walk and Clean’ campaign was just one way to combat the disease, noting that more than 300 GSK employees were involved in the ‘Spot, Tag and Clean’ exercise.

The ‘Walk & Clean’ Dengue Warriors’ march will make the final pit stop in Johor on Sept 24, she added.

Wong May-Chew from GSK joined Dengue Warriors in April after she became infected with the excruciatingly painful fever.

“At that time, I realized my understanding about dengue was very limited. Now I know the symptoms of dengue and the best course of action when I suspect dengue. I am delighted to become a change agent in my community to help others so they don’t have to go through what I went through.

“I would like to encourage everyone to join the AAD movement, become a Dengue Warrior, and contribute to making a dengue-free community,” she said.

For more information on AAD activities, visit www.facebook.com/aadmalaysia/. Join the conversation on social media with #AlliedAgainstDengueMY and #BersamaMelawanDenggi.