Thursday, April 9
You are at:Home»News»Sarawak»Fun-filled Siniawan Festival on the cards 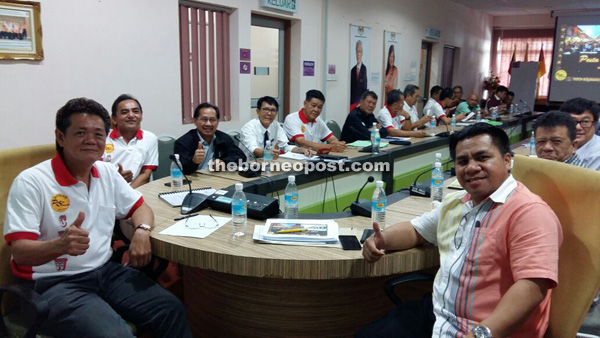 (From left) Liew, Bong, Inting and Miro (right), give the thumbs-up for a successful Siniawan Festival 2016.

BAU: Siniawan Festival 2016, a four-day event of food and music, cultural and various health activities, should be able to turn the once bustling Chinese village into a vibrant tourist destination.

The organising chairman Kapitan Liew Jiu Fung said the inaugural festival which would take place from Sept 15 to 18 at Siniawan old bazaar, would feature an array of activities that cater for all.

To kick start the event, a jungle trekking and cycling challenge would be held including a host of other sports activities such as futsal, sepak takraw, blowpipe demonstration, street and traditional games, and a state-level photography competition.

Those interested to visit historical sites in the area could participate in a programme to explore Rajah James Brooke Heritage Trail. Brooke’s first fort in Sarawak – Fort Berlidah – was in fact built near Siniawan. He also built a bungalow on the summit of Mount Serembu where prominent anthropologist Alfred Russel Wallace had stayed for over a year in 1854.

On Saturday, visitors would be treated to a ‘Western country and Cowboy night’ and live band performances of country western music including classic songs from the 60s to the 80s. The theme coincides with the single-street bazaar’s reminiscent of a typical American ‘Wild West’ cowboy town.

Liew hoped the festival would be successful in attracting a large crowd and make it to the state’s tourism calendar of activities for next year to create a domino affect that would spur economic growth for the local community.

“Before 2010, most people called Siniawan an ‘old people’s town’ because not much was happening economically and job opportunity was scarce. This led to the youngsters moving away to seek jobs elsewhere.

“The situation has since improved after the establishment of the popular Siniawan Night Market and we hope to further boost economic activities in the area,” he said before a briefing to representatives from various state and tourism agencies as well as local authorities here yesterday.

A Bidayuh section would also be set up at the festival with stalls selling handicraft and local delicacies, and Bidayuh cultural performances.

Liew said the committee was planning to turn Siniawan Festival into an annual event. He believed it would be easier to propose for the conservation of Siniawan Bazaar and other heritage sites in the vicinity.

“We hope the Tourism Ministry will play a more active role to promote Siniawan as a heritage site to promote tourism and boost economic activities. This would attract the younger generations to work and do their business here and make the area more vibrant.”

Miro supported the idea to turn Siniawan into a tourist destination. He believed that Siniawan Festival had the potential to become one of the biggest events in Bau District. He also hoped the event would be successful and memorable to help achieve its objective.

At the briefing, he announced an allocation of RM10,000 each from himself and Puncak Borneo MP Datuk Seri Dr James Dawos to support the festival.