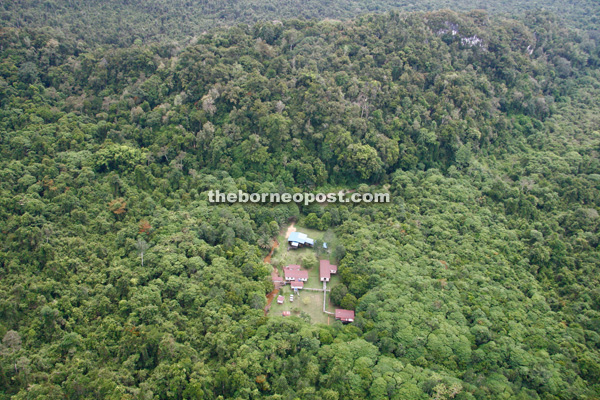 Aerial view of Bukit Sarang: The building is the research station. The mountain in the background holds caves where ancient human skeletons have been found. Signs of early civilisation are also visible in a cave with drawings of human figures.

BINTULU: GP Pusaka Sdn Bhd’s recommendation to the state government to gazette Bukit Sarang and Binyo Penyilam in the hinterland of Bintulu as National Parks is most opportune and laudable as it represents the cumulative efforts and resources the conservation-conscious organisation has put into preserving the two areas and more importantly, a geniune endeavour at environmental protection on their part.

According to GP Pusaka Sdn Bhd conservation manager Joanes Unggang, their conservation initiatives actually began in 2004 and since then, Bukit Sarang and Binyo Penyilam have been attracting many  researchers for valuable studies on the rich biodiversities of the two areas.

“We hope Bukit Sarang and Binyo Penyilam could be gazetted by the state government as National Parks as they are rich in flora and fauna. By doing so, international environmental bodies especially, will see we are very serious in preserving and conserving our rainforests.

“At the same time, this will also show how serious we are in preserving at least one million hectares as totally protected areas (TPAs) as envisioned by our State government,” Joanes told thesundaypost yesterday.

He reiterated that although both areas had been allocated to the Sarawak Planted Forest (Pulp and Paper) Project LPF 0043, they had been set aside as conservation areas.

“Thus, we hope the state government will recognise our efforts to conserve these two areas and it’s our fervent hope both Bukit Sarang and Binyo Penyilam will be gazetted as National Parks,” Joanes said.

Besides the appeal from GP Pusaka, the people in Bukit Sarang and Binyo Penyilam have also given their undivided support for the two areas to be gazetted as National Parks as the move will enhance and sustain their long-term livelihoods.

They say the two areas should be preserved and conserved for their rich flora and fauna and unique landscapes.

The villagers believe once gazetted as National Parks, the two areas will benefit from the various tourism spinoffs. For instance, the locals can earn extra income by transporting visitors to the Parks apart from providing homestays for a “village life” experience.

There are also many species of animals, bats, birds, insects, frogs, snakes and flowers which should be protected. And no less important, the caves in the areas hold great potential for all kinds of research.

A wide range of activities such as caving, hiking and boating can also be organised. Visiting cavers can explore the many caverns within walking distance from the research station which could double as a homestay.

The protection of both Bukit Sarang and Binyo Pinyiram is considered critical as they could further contribute to the conservation of species, especially in the inland peat swamp landscapes.

Through research collaborations, these areas have been recognised as conservation areas in the state for protecting endangered and endemic species besides increasing the importance of legal protection for these two areas to enable effective conservation management and proper protection over the long term.