Monday, August 3
You are at:Home»News»Sarawak»Sawmill fire results in over RM7 million losses 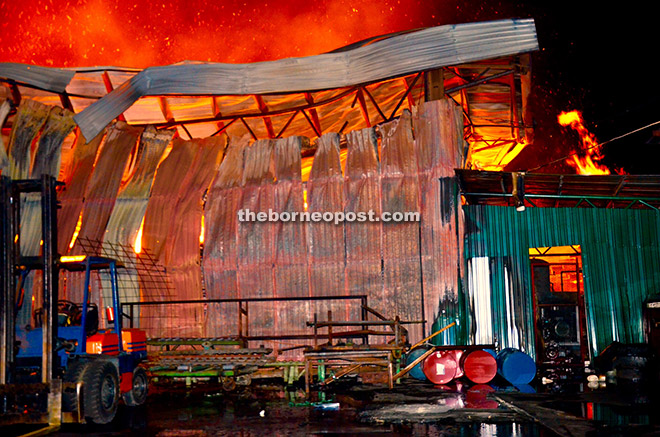 SIBU: More than RM7 million worth of properties went up in smoke after a sawmill in the new Rantau Panjang Industrial Park was burnt and partially collapsed early yesterday.

The fire was first spotted by a worker staying in a nearby quarters when he woke up to go to the toilet. He then called his employer who subsequently called the fire station.

As the sawmill housed both the production section and the warehouse, losses were apparently heavy.

The mill was stacked high with finished wood products like plywood and others, and the fire spread to the log pond where it burned the timber logs.

Destroyed also were about a dozen heavy machines in the production section, a lorry and two excavators and other mill equipment and tools.

Sungai Merah Fire Station received a call on the fire at 1.45am and rushed a fire engine and a team of firemen to the scene. They were backed by more fire engines and men from Central Road Fire Station.

When the fire was eventually brought under control after day break, 90 per cent of property in the mill was destroyed.

Though the fire fighters continued to spray water on the building throughout yesterday morning, when reporters returned to the scene in the late morning, tongues of fire could still be seen in parts of the mill. Firemen said their efforts were frustrated by the low water pressure. There are about 130 workers staying in the quarters near the sawmill.

Although their quarters were not burnt, as a precaution, the workers, mostly from Indonesia, moved their belongings out.

A worker said the fire spread fast because the mill was stacked with finished wood products and timber logs.

He said they could not do much, except help the firemen to hold water hoses.

Explosions were heard from inside the mill when the fire was at its height.

The sawmill, situated about 18 km from Sibu town, has been operating for six years.

It exports timber products to the Philippines and Korea besides catering for the domestic market.