Thursday, August 13
You are at:Home»News»Sarawak»Potential in herpetofaunal tourism 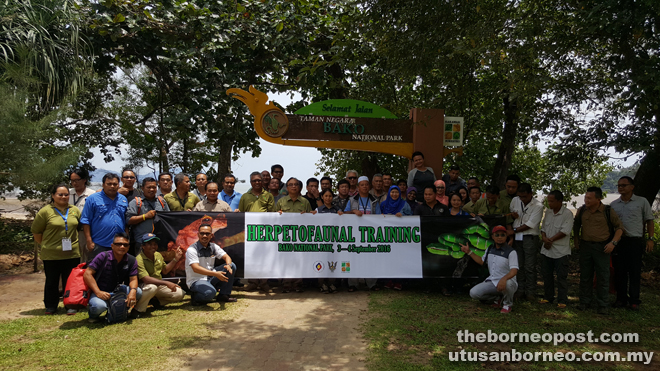 Participants of the training in a photo-call after the closing ceremony.

KUCHING: Herpetofaunal ecotourism is something worth pursuing as interest in it among local and foreign tourists are increasing.

“In Sarawak, tour packages that have elements of wildlife watching mainly center on iconic species that are easy to see, such as orangutans, proboscis monkeys and hornbills,” said Chung at the closing ceremony of herpetofaunal training at Bako National Park yesterday.

His speech was read out by Sarawak Forestry Kuching regional manager Semilan Ripot.

“Although these species have growing interests among local and international tourists, we should not stop at that. There are many other species that has ecotourism potential, such as the herpeto species,” he said.

“Species such as lizards, snakes and frogs in Sarawak have their own uniqueness. Furthermore, nearly three quarters of amphibian species recorded is endemic.”

Chung added that being the smallest, these creatures in fact create the most melodious jungle symphony, making it a dynamic tourism product.

“We should take into account the great successes of herpetofaunal ecotourism involving Komodo Dragons in Indonesia and the Orange Golden Mantela Frogs and Parson’s Chameleons in Madagascar.”

Previous ArticleSee: Set up state cabinet committee to keep Zika at bay
Next Article Steps taken to teach the poor to be independent