Wednesday, January 26
You are at:Home»News»Sarawak»Hollywood set to make feature film on life of Sir James Brooke 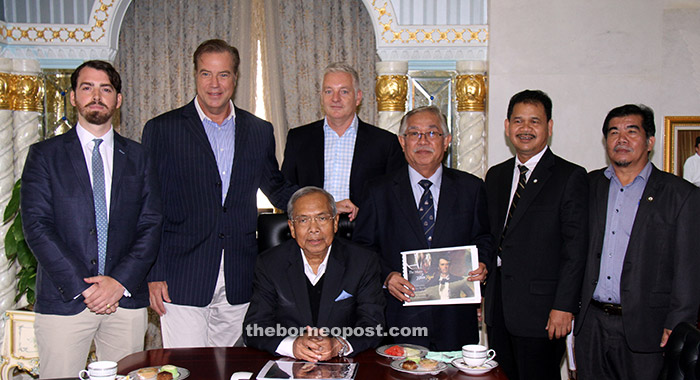 Jason (left) and the visiting entourage (from second left) Allyn, Fawcett, John Sikie including Ik Pahon (second right) have their pictures taken with Adenan (seated). — Photo by Chimon Upon

KUCHING: Hollywood is set to make a feature film on the life of Sir James Brooke, the first Rajah of Sarawak.

American film producer Rob Allyn, who has a string of box office attractions to his name, plans to produce the film with British producer Simon Fawcett.

The inking of the memorandum of understanding (MOU) on the project between the production team and Ministry of Tourism, Arts and Culture is scheduled to be held at The Riverside Majestic Hotel here today.

Some of the scenes of the movie will be shot in Sarawak to boost the state’s tourism and filming industry.

“The project will be launched with Tourism, Arts and Culture Minister Datuk Amar Abang Johari Tun Openg. The state government is fully behind this project, we have producers from the United States and United Kingdom involved in the project as well,” Brooke Heritage Trust chairman Jason Desmond Anthony Brooke told The Borneo Post when met at a courtesy call on Chief Minister Datuk Patinggi Tan Sri

He was accompanied by the film producers Allyn and Fawcett, Tourism Ministry’s permanent secretary Ik Pahon Joyik, who is also Sarawak Tourism Board (STB) chief executive officer, as well as Assistant Minister for Arts and Culture Datuk John Sikie Tayai.

The courtesy call was to discuss on the project which is a working partnership between Allyn’s Margate House Film and the Brooke Heritage Trust.

Jason is the grandson of the last Rajah Muda of Sarawak, Anthony Walter Dayrell Brooke.

The film, to be entitled ‘The White Rajah’, would touch on the great untold saga of James Brooke falling in love with the beauty, wildlife, the people and cultures of Sarawak.

It is understood that the producers envisioned to build a full-scale working replica of the Royalist, the schooner in which James Brooke sailed to the state in the late 1830s. The vessel would remain here as a heritage attraction.

Meanwhile, Jason will be in the state till Sept 28 for the launching of the Brooke Gallery project at Fort Margherita.

Abang Johari is scheduled to officiate at the opening of the gallery scheduled for Sept 24, which coincides with the 175th anniversary of the founding of Sarawak.