Saturday, October 31
You are at:Home»News»Sarawak»No need to press panic button 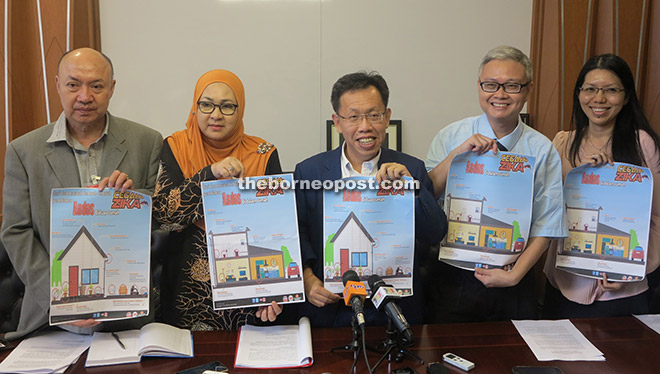 The best way to contain the virus is by eliminating breeding places of Aedes mosquitoes which transmit Zika virus and other diseases such as dengue and chikungunya.

The advice was given by Minister of Local Government Datuk Dr Sim Kui Hian at a press conference after a briefing by the State Health Department held at the State Legislative Assembly Complex here yesterday.

“The public are advised to clean their houses to be free from any potential Aedes breeding ground, a practice of 10 minutes, every week.

“Everyone must play their role seriously and not push all the responsibility to the local authorities,” he said.

Stressing the need to control the breeding of aedes mosquitoes, Dr Sim pointed out that there had been an increase of dengue fever cases this year compared to last year.

Within the same period of time, six deaths have been reported compared to three death cases recorded in 2015.

Commenting further on the first confirmed Zika case in the state, Dr Sim said the patient is a 35-year-old in Miri who is two months pregnant.

“The woman is in stable condition and is closely monitored by the obstetrician and paediatrician.”

According to him, the patient had worked in Singapore before and she last visited Singapore from July 24 to 29.

He added that the patient’s blood specimen has also been sent to IMR for viral sequencing to determine the origin of the virus, whether it is from French Polynesia or local strain.

The patient’s sister is the sixth Malaysian to be infected by this virus, the 39-year-old sister who lives in Setapak was hospitalised in Kuala Lumpur on the same day (Sept 11), as she had shown symptoms of the fever after visiting her sister in Miri on Aug 26, before leaving for Kuala Lumpur on Sept 6.

The other six members of the family who are living with her in Miri have no symptoms of Zika infection.

“Case surveillance and prevention and vector control activities have been carried out in the patient’s residential areas immediately after the notification of the suspected case was received by Miri Divisional Health Office on Sept 11.

These activities include eliminating Aedes breeding places, larviciding, fogging and health education to the residents in the area.”

Dr Sim disclosed as of Sept 13 medical personnel had screened 156 out of 590 residents living within 200-metre radius form the woman’s house.

Control measures are continuing and will cover an area within 400-metre radius from the case’s house.