Saturday, September 19
You are at:Home»News»Sarawak»How the Kelabits rewrite the script on their life-paths 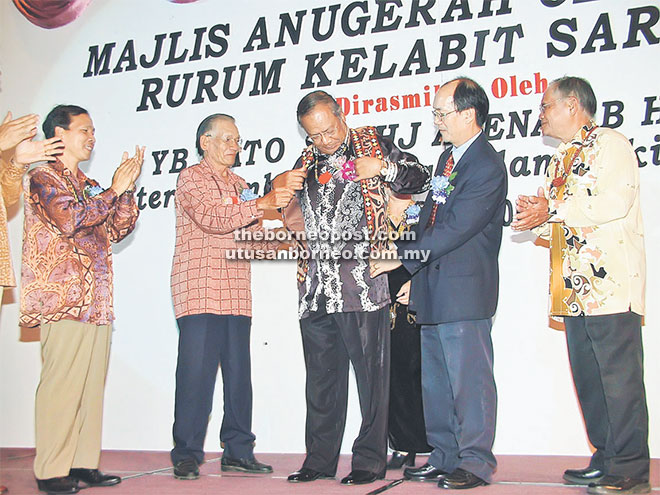 THEY walked for weeks through the jungle to further their education in urban schools. Years later, some walk in corridors of power while others are trailblazers on both the domestic and international scene.

Despite being one the smallest communities in the state, the 6,000-strong Kelabit community’s extraordinary vertical mobility has propelled them upwards in the social strata, as they are now perched confidently across the board on the state, national and global stage.

The Kelabits, and the larger Orang Ulu community, celebrate Malaysia Day with all Malaysians – feeling blessed to be citizens of this nation despite the challenges, issues and difficulties encountered since the formation of Malaysia.

“Whatever the critics may have said or continue to say about whether we’re better or worse off since the formation of Malaysia – it is a fact that the Kelabit community has much to be grateful for as Malaysians,” said Datuk Gerawat Gala, the first Kelabit lawyer who recently became the first Kelabit deputy speaker of the State Legislative Assembly (DUN) after winning a four-corner fight at the May 7 state election this year in the newly-created Mulu state constituency.

His rise marks the first time that the Kelabit community has had a voice in DUN since the formation of Malaysia – a big, commanding voice at that. His progress, and many others, shines the spotlight on the heart-tugging story of the Kelabit people’s transformation.

When Malaysia was formed in 1963, there were only  two primary schools, two rural clinics manned by dressers, no piped water supply, no electricity, no inter-village roads in Bario and none connecting the highlands with town, and only one rural grass runway for a nine-seater Norman Highlander plane. There were less than 10 primary school teachers and no university graduate from the community.

Today, there are five primary schools and one junior secondary school, five ‘Klinik Desa’ (rural clinics) manned by a doctor, medical assistants and nurses, gravity feed piped water supply, 24-hour electricity supply, about 20km of concrete and gravel inter-village roads in Bario, more than 300km of upgraded logging road connecting all the settlements in the Kelabit highlands with Miri.

There are four all-weather tar-sealed rural airports serviced by 19-seater MASwings Twin Otters, not less than 50 teachers in primary and secondary schools, lecturers in colleges and universities – locally and overseas.

There are over 700 diploma and degree holders – about 10 per cent of the small Kelabit population – with graduates having benefitted from various forms of government sponsorship and assistance in the course of their studies.

Among these graduates are nine with PhDs, more than 20 lawyers, a judge, more than 10 doctors including specialists, a number of very successful professionals in the oil and gas industry, and also private entrepreneurs.

Gerawat said the community had much to be grateful for as they acknowledged the support and assistance that the Malaysian government had given to them, despite the challenging environment in the remote Kelabit highlands.

“Most of all, as a community we are thankful to God for the many blessings on us channelled through our government and other parties that have enabled our community to progress since the formation of Malaysia,” he said.

Indeed, the community has given back and contributed dedicated and distinguished services to the state and nation over the years in various capacities in government, the private sector and as non-governmental organisations (NGOs).

Among them are Henry Lian Aran, the first Kelabit graduate who was a director of human resources in Shell Malaysia in the 1990s after a series of international postings; Dr Rolland Dom Mattu, the first Kelabit doctor who is now a well-recognised oil and gas specialist in Sarawak; as well as Dr Philip Raja, paediatrician and children’s heart specialist.

Datuk Seri Idris Jala, another outstanding achiever who created many firsts on his way to the top – as Shell Malaysia’s managing director (MD) and chief executive officer (CEO) of the gas business of Shell Malaysia; MD and CEO of Malaysia Airlines (MAS); and the first Kelabit in federal cabinet as Minister in the Prime Minister Department and the CEO of the nation’s Performance Management and Delivery Unit (Pemandu).

Datu Robert Lian is another trailblazer, in his former capacity as director of Immigration Sarawak; and Dato Mohd Medan Maya being the first Kelabit to be MD of MLNG Group of Companies in Malaysia and vice president of Gazprom for East Asia region.

Dato Isaac Lugun is the current president of Rurum Kelabit Sarawak and one of the community’s successful corporate leaders. After a successful career in Petronas and Exxon, he is now MD/CEO of Samalaju Group of Companies, responsible for the development of Samalaju township and industrial development which is part of Sarawak Corridor of Renewable Energy (SCORE).

There are successful entrepreneurs in Osart Jallong and Peru Balan Ding in the oil and gas sector; and Asa Laba, the regional manager (Asia Pacific) for one of the international oil and gas companies.

Supang Lian is the first High Court Judge from the community.

The Kelabits owe their prominent rise to an early start and single-minded pursuit of education, starting with the first school in the highlands opened in February 1946 by Tom Harrison, a former British soldier who lived with the Kelabits for two years after the Second World War.

He roped in Pual Kohuan, a student of CMA Theological School in Makassar of the Celebes Island in Indonesia, to start the first school in the Bario highlands at Pa Main, which has the longest longhouse in the eastern part of that area. By the end of 1948, three of the adult students were sent to Batu Lintang Teachers Training College – Idris’ father Henry Jala, David Lian and Stephen Baraok.

Upon graduation, Henry went to open a school in Long Lellang Kelabit village, David joined Kohuan to teach at Pa Main, while Baroak became an upriver agent for the community in Bario, paving the way for others to take the high road to a better future.

Bright Kelabit students trekked through the formidable jungles and mountains to further their education in Tanjong Lobang Secondary School in Miri in the early years.

They went on to rise to the top in their respective fields in the public and private sectors, while others studies in Marudi or Long Lama secondary schools.

Miri City Councillor John Terawe of Bario said, without a shadow of doubt, the community and Bario had progressed in leaps and bounds physically, socially and economically.

“Without Malaysia, we Kelabits would not have all these opportunities; we would probably still be lacking infrastructure and without much accessibility in our remote locations. We, in Malaysia, are on par with any community in the world now,” said Terawe, who is formerly a Marudi District councillor.

Forefathers such the late Nulun Tuan, who never went to school but was well-known for his humour and interest in learning to speak English, were a sharp contrast to the eloquent younger generations.

While Nulun knew how and when to say ‘yes’, ‘no’,  ‘good’, ‘no good’ and ‘where are you going’, today’s Kelabits are now respected on the international stage.

All the way to the UN

John Terawe has been on such a stage, receiving international accolades, including the ‘Equator Prize’ on behalf of the Alliance of the Indigenous People of the Highlands of Borneo (Formadat) which was held as part of the United Nations (UN) Conference on Climate Change in Paris, France, on Dec 7 last year.

Attributing early community centralisation, education and later technology as the three main thrusts of this transformation, John Terawe joked that Bario was probably more well-known than Miri city on the international scene, when it came to exposure and international accolades received over the years.

He was instrumental in the onset of the telecommunications era under the pilot e-Bario ICT project with Universiti Malaysia Sarawak (Unimas) and Malaysian Multimedia Communications Commission (MCMC), which propelled Bario and the Kelabits onto the international scene – earning international accolades and drawing tourists to the remote highlands of Sarawak.

The e-Bario opened the door to listing Kelabits as one of the seven most intelligent ethnic communities, in that anyone from Bario can access Kuala Lumpur or any part of the world via Internet.