Saturday, December 3
You are at:Home»News»Sarawak»Old Sibu — History and heritage through snapshots 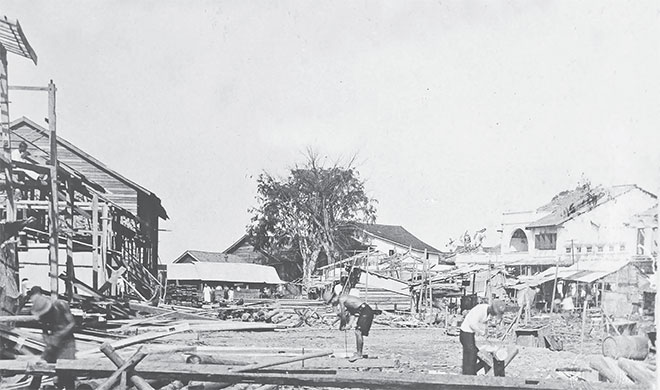 The captured scene shows the aft ermath of the ‘Great Fire of Sibu’ in 1928. All features as seen on this photo are gone, except for the tree at the centre and the concrete block on the right. The raintree in front of Tua Pek Kong Temple is now the oldest tree in Sibu Central Business District. Tua Pek Kong Temple was also rebuilt.

THERE is no better gift to offer in celebration of the birthday of Malaysia than the memories of the Sibu townsfolk, who have walked down the path of progress together.

This is the cherished gift from the Photographic Society of Sibu, as its chairman Ting Siew Ping has agreed to share the photographs taken and collected by their members with The Borneo Post.

The society, which formed in 1952, has photographs taken during the days of the White Rajah, the British colonial era after the Japanese Occupation up till the formation of Malaysia.

Ting said some places shown on the photographs had been wiped out in history, while others had undergone major changes.

“The townsfolk have all contributed to nation-building. We shall share these warm memories to remember our unity and love in the photographs. All races, all people have played an equal role in building this harmonious Fairland Sarawak.”

Ting said some of society members who contributed the photographs had died; some had left town: “But, these warm memories from them will remain for our young generations.”

He said they had exhibited some of these photographs during the annual Borneo Cultural Festival, but the organiser could never have a space big enough to exhibit all their collections.

The Borneo Post has reprinted some of these pictures for this Malaysia Day special supplement to celebrate the unity and aspiration of the people.

Sibu has progressed since the 1850s when the Chinese settlers, mostly the Hokkiens and some Teochews, first arrived.

The town was formerly called ‘Sibau’ – named after the wild rambutan found abundant along the river basin.

This name was given by Sibu Resident on June 1, 1873; before that, the town was called ‘Maling’, after Tanjung Maling at the confluence of Rajang and Igan rivers.

Tanjung Maling had developed from a fishing and farming village, populated mostly by the Malays and the Melanaus.

By the time when the town was renamed Sibau, the Hokkiens had arrived.

From 1901, the Foochow, Hin Hua and Cantonese settlers began to arrive as Rajah Brooke opened Sibu for agricultural development to help the ‘Kingdom of Sarawak’ achieve self-sufficiency in food.

The earliest and the most precious memories of the photographic society’s collection were those taken in 1928 after the ‘Great Fire of Sibu’.

There was only one main street then – Channel Road, built of wooden shops with ‘attap’ roof and ‘belian’ beams.

The fire wiped out the town, but soon rising from the ashes was the first concrete block of shops – it still stands today at Chew Geok Lin Road, beside Tua Pek Kong Temple.

From there, modern Sibu began to emerge. Today, there are nearly 300,000 people in Sibu Division.

Penghulu Soon Choon Hoo has an interesting tale on the progress of Sibu.

He said the town initially sat on two islands at the river front – Pulau Babi (now Khoo Peng Loong Road), so named because of a pig’s slaughterhouse there; and the Sibu Town island.

Soon said the two islands vanished because part of the Lembangan River had been reclaimed; for the remaining part, the Sibu Central Market was built over it.

The community leader said streets of the old town were named after the businesses of the people and their geographical positions – Bank Road (named after the first bank of Sibu, the ‘Hwa Tak Bank’), Workshop Road, Blacksmith Road, Channel Road (named after the channel of Lembangan River running in parallel with the road), Mission Road (where the Catholic Mission formerly was), Cross Road, Island Road and Kampung Nyabor Road (an early Malay village that had given way to commercial development).

Sibu grew from being a fishing and farming village during the Brooke era to becoming the commercial hub of Sarawak in the Colonial times and later, a booming town in the 70s and 80s.

It sprouted as a town full of trishaws to one flooded with bicycles in the 60s. It is noteworthy to mention that during the timber trade boom in the 80s, the townsfolk cheekily regarded Sibu as ‘where most Mercedes Benz cars were found in Sarawak’.

Today, Sibu has diversified in businesses.

Soon said: “Sibu will continue to progress in the harmony of ‘Fairland Sarawak’. Despite its changing faces, its fine characters of warm hospitality and friendship will remain. This will be the graceful landmark of Sibu. This is the best birthday gift from Sibu for the nation.”