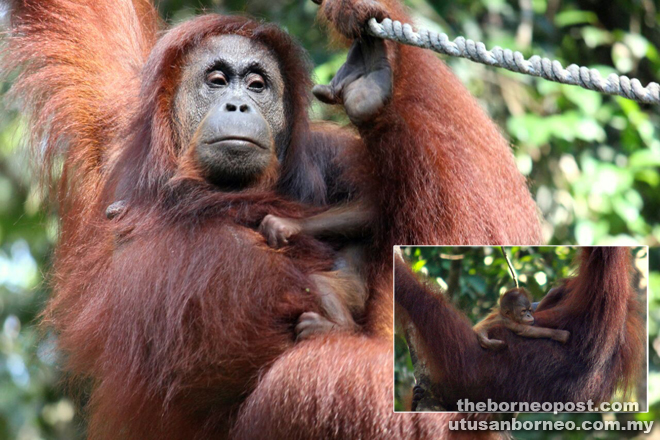 A protective Analisa clings closely to her new baby. ( Inset) The new baby orangutan makes its debut at the Semenggoh feeding platform.

In a press statement yesterday, Sarawak Forestry Corporation (SFC) said an orangutan named Analisa, aged 20, was spotted at the feeding platform last Sunday (Sept 18) with a baby clinging closely to her.

It is believed the baby was born on Malaysia Day (Sept 16) as Analisa was last seen at the feeding platform three days before.

SFC said both mother and baby looked fine, but the gender of the baby could not be determined as it was clutched too closely by its protective mother.

Analisa also gave birth to Anakku and Digital Guro – a male adopted by the Guro District Council of Seoul, South

Korea. But Digital Guro died prematurely last November at the age of three due to natural causes.

Analisa herself was also born at Semenggoh to Seduku, 45, the oldest female orangutan at the centre.

With this new birth, Semenggoh has 27 free-ranging orangutans that are a constant delight to visitors.

Both Semenggoh and Matang Wildlife Centre run an orangutan adoption programme, which is open to the public.

Individuals can adopt an orangutan for one year by contributing RM200, while the corporate rate starts from RM10,000 per year.

Proceeds from the adoption programme go towards funding conservation work.

Both centres also run the ‘Heart2Heart with Orangutans’ programme, which gives participants hands-on experience in orangutan husbandry and rehabilitation.