Saturday, August 15
You are at:Home»News»Sarawak»Brooke Gallery opens at Fort Margherita 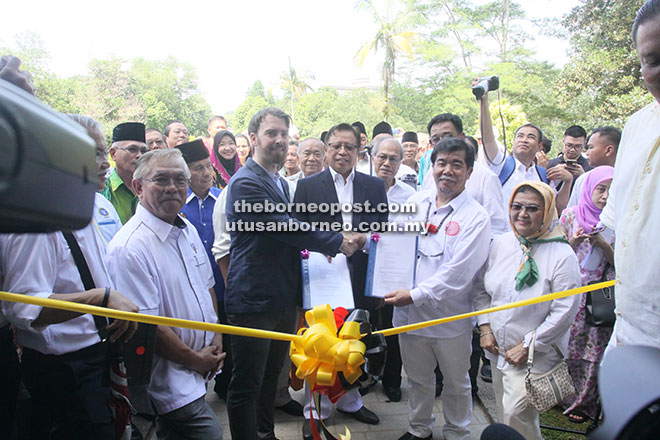 Abang Johari (centre) looks on as Jason and Ipoi exchange mementos at the opening of the Brooke Gallery at Fort Margherita opposite the Kuching Waterfront. — Photo by Jeffrey Mostapha

KUCHING: The iconic Fort Margherita, which now has been turned into Brooke Gallery, opened its doors to the public yesterday after it was officiated by Deputy Chief Minister Datuk Amar Abang Johari Tun Openg.

A collaboration between the State Museum Department, Tourism Cultural and Heritage Sarawak and the Brooke Trust, the gallery showcases belongings from the Brooke family and artefacts during their time as the White Rajah.

With items provided by the Brooke Trust itself and also the Museum Department, the project received volunteer support from the state, United Kingdom and also Australia.

Abang Johari in his speech at the opening said the gallery serves as a reminder to the newer generation of Sarawak’s history, a period where it was ruled by the Brooke family.

“We want to share with our people, and also tourists our story, and the Brooke gallery serves the purpose. Apart from this building which was once among the forts built by Brooke, other iconic and historical buildings include the Astana, the Old Court House, Post Office and Brooke Dockyard,” said Abang Johari who is also the Tourism Minister.

“I leave it to academicians and historians to value the history of our state, but we cannot deny the fact that the Brooke indeed is part of our history and legacy that they left behind played a significant role towards where we are today,” he added.

Meanwhile, State Museum director Ipoi Datan said the fort was handed back to the state government after it was used as the Malaysian Royal Police Force museum since 1971.

“Completed back in 1879 with a cost of $8,100 Sarawak Dollar, the fort now houses a gallery from the Brooke family,” he said.