Monday, August 3
You are at:Home»News»Sarawak»Kite flyers from 21 countries to lift the sky of Bintulu 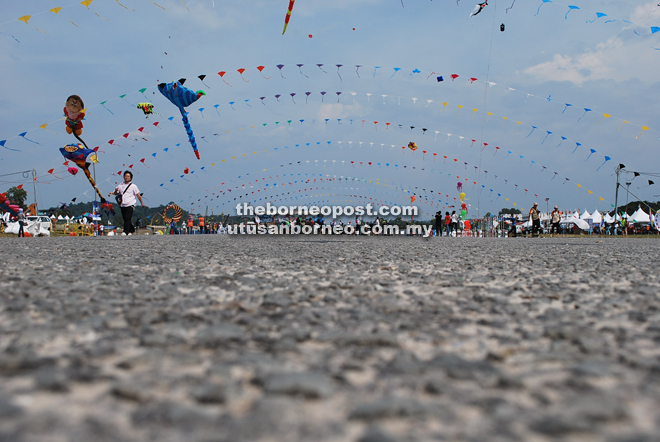 BINTULU: The sky here will be a collage of colourful kites of all sizes and shapes during the 12th Borneo International Kite Festival 2016 from Sept 28-Oct 2.

The old airport site itself bears witness to several records in the Malaysia Book of Records (MBR).

The first MBR record was created in 2008 for the most number of kites—1,655 of them—flying simultaneously in a span of 20 minutes.

The second MBR record in 2010 featured the most number of train-kites flying simultaneously in a single location in 20 minutes: there were 92 sets of them.

The third entry into the MBR was in 2013 during the Sarawak Gudi Festival. The record was for the most number of kites flying simultaneously in 20 minutes: there were 2,250 kites in the sky.

A total of 2,500 diamond kites clinched the fourth entry in 2014. The kites formed the longest arch kite tunnel of 500 metres along the old airport site.

Last year, 5,650 arch kites took to the sky, and this spectacular feat flew into the MBR, too.

Since then, it has become a signature event for Bintulu and attracted many kite flyers from around the world to share their passion in kite flying.

This year, no MBR record will be created, but it will still be the perfect event for everyone to enjoy.