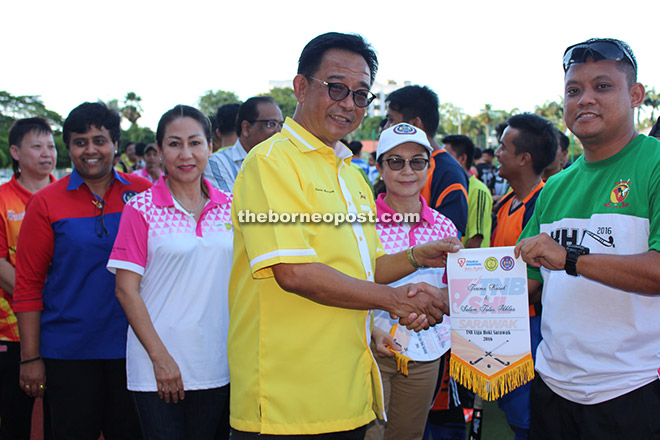 Karim (third right) accompanied by Mary (second right) and (from left) Linda, Shamala and Regina, presents a souvenir to a representative of Warriors Hockey Club team.

KUCHING: Assistant Sports Minister Datuk Abdul Karim  Rahman Hamzah is confident that hockey in Sarawak will reach greater heights under the new management of the Hockey Association of Sarawak (HAS).

He is optimistic that under the leadership of HAS president Datin Mary Sadiah Zainuddin, Sarawak will be able to produce more players to represent the country in international competitions.

“With personalities like Mary and Regina Janting who are so committed and passionate about developing hockey, we are on the right track and hockey in the state will definitely further develop in one or two years and probably be one of the sports that will bring to the good name to Sarawak in Sukma,” he said at the opening of the inaugural TNB Sarawak Hockey League at the Sarawak Hockey Stadium yesterday.

Having said that, Karim is hoping that Sarawak will not only be champions year after year in the MSSM championship but also strive to become the champions in Sukma in Perak in two years’ time.

“The Sukma title has always been elusive to us. We have not been able to win the championship for 26 years,” said Karim who is also Assistant Housing Minister.

On the TNB Sarawak Hockey League, he noted it was a good beginning for the development of hockey where more talents could be unearthed.

“I am also impressed with the development programmes lined up by HAS including working closely with the State Education Department to develop the sport at grass roots level with the Under U11, 13 and 15 boys and girls,” he added.

“This is the kind of structure that we would like to see. Without it, we are unable to unearth new talents where they can be groomed into high calibre players.”

fully utilise the sports facilities that were built or upgraded for Sukma XVIII.

“I hope that by organising such international competitions, it will attract more interest in the sports concerned,” he said, naming the World Diving Championship that will be held in Kuching next month and an international badminton championship in Sibu next year.

Earlier, Mary welcomed former and current hockey players and enthusiasts to contribute ideas on how to further develop hockey in the state.

“With such facilities in Kuching, HAS has no reason not to develop hockey,” she said, adding that she hoped that more such stadiums could be built in other divisions such as Sibu and Miri to develop and upgrade the standard of hockey there.

“Although we have a small hockey community which cannot be compared with the big football community in the state, I am proud to say that we are still able to produce players to represent the country in international competitions,” said Mary.