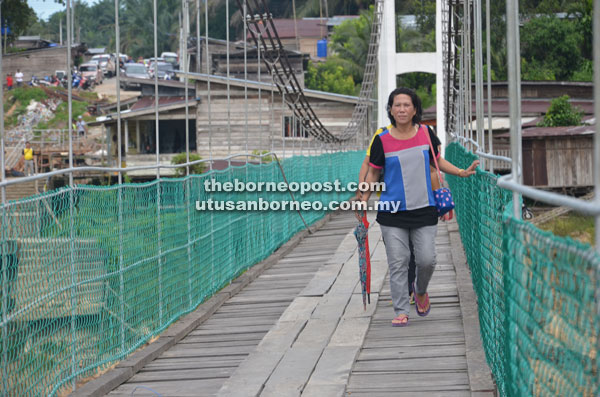 SIBU: Parents of pupils at SK Saint Matthew in Selangau District can heave a breath of relief now that their children no longer need to board longboats to go to school – thanks to the newly-completed suspension bridge over Sungai Oya.

The 100m structure, which was completed several months ago under a federal government project, links the primary school with Nanga Sekuau.

Local resident Emas Betuon said the bridge was a long-awaited facility for the pupils and their parents, as well as teachers and the school staff members.

“It’s more convenient now. Previously, we had to use longboats to travel between the school and Nanga Sekuau along Sungai Oya, which was quite daunting because there had been several cases in the past where some boats capsized,” said the 44-year-old, whose daughter and son are attending Primary 6 and 2, respectively, at SK Saint Matthew.

According to Emas, a longboat ferrying school pupils to Nanga Sekuau capsized in 2013 – believed to be due to overloading.

“My son, who is now in Form 2, was among the passengers.

It was a nightmare for every parent, I believe, although nobody was hurt in that incident. The pupils, however, lost all their books and school stuff which were swept away by the river currents,” she recalled.

Another parent Landa Bundan, 30, said she could visit her son at the school any time – relieving her of any worries about having to board a longboard to do so, especially in cases of emergency.

Landa’s boy Mcgyver Franklin is in Primary 2 and he is among pupils staying at the school hostels.

“The school management encourages all pupils, except the pre-schoolers, to stay at the hostels. I think this is a good move and we support it fully, although our longhouse is just across the river,” Landa said.

Notably, both Emas and Landa attended the same primary school when they were little girls.

Meanwhile, SK Saint Matthew headmaster Mawang Nili hoped that the bridge could be widened a bit – at least to accommodate a wheelbarrow.

“This would facilitate contractors to send food rations and other items to the school. Nonetheless, the bridge is a big benefit for the whole community here, not only those from the school. The longhouse folk can cross the bridge as well as to go to their fruit orchards and paddy farms at the other side of Sungai Oya.

“Previously, it was very dangerous to use longboats to get across, especially when the river currents were strong,” he said.