Tuesday, July 5
You are at:Home»News»Sarawak»Bung Bratak Heritage Centre for completion by May 2017 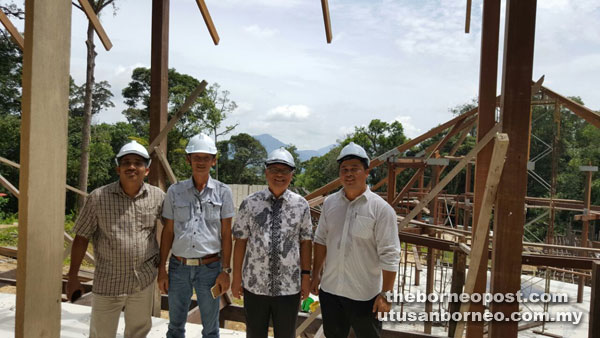 Minos (second right) with the contractor and JKR staff at the project site recently.

He said the Department of Public Works (JKR) and its contractor have assured that the centre would be fully completed by May next year as 80 per cent of it will be done by end of December this year if the weather permits.

He also pointed out that students of several Australian universities and tourists from the  People’s Republic of China had indicated interest in spending time at the centre, which boasts of beautiful mountain-top scenery, virgin jungles with unique plants and fauna, two waterfalls, two springs and numerous wild animals and birds.

“So Bung Bratak is not just a Bidayuh historical site but it has everything nature can offer. It is truly an eco-tourism centre in its own class,” he said.

“When completed, BBHC will have a unique and traditional longhouse which can accommodate 100 persons, another longhouse for conferences and seminars, a big baruk (conference hall), a reception hall and dining hall,” he stressed.

“Dayak food and drinks will be available and Dayak cultural performances will be presented for guests. Everything will be affordable,” he added.

Said to be the first of its kind in Borneo to turn a famous historical site into a cultural or tourism centre, BBHC is expected to be a real hit with both local visitors and foreign tourists.

“BBHC will be truly unique and different. It will give special experience to visitors and tourists,” he said.

Minos, the man instrumental behind BBHC, said the many queries on the centre from near and far, especially from Australia and China, indicated much interest in the centre which augured well for all. Minos is also Walikota of Samarahan.