Friday, May 27
You are at:Home»News»Sarawak»Local fishermen jittery, hope complex will open 24/7 even on public holidays 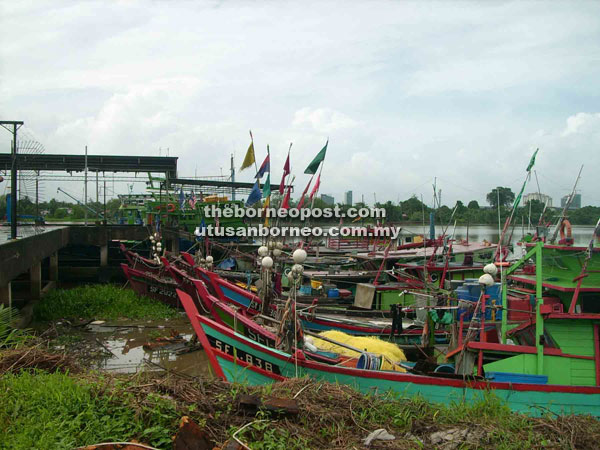 Kotak Fishermen Association’s fishing port at Bintawa in Kuching. Fishermen use the two wharves there to unload their catch.

KUCHING: Two key questions popped up from local fishermen’s minds when news about the need to land their catch at LKIM Fishing Complex broke yesterday.

First, they wondered whether the complex would be opened round-the-clock and second, the kind of fees they would be asked to pay.

Hence, it is a must that the proposed Fisheries Development Authority of Malaysia (LKIM) complex open round the clock throughout the year, no matter what.

“When we arrive at the port, sometimes in the middle of the night, we will need to unload our catch. Waiting is not an option,” he told The Borneo Post yesterday.

“It is crucial for the catch to be unloaded and distributed to markets or buyers immediately when we reach the complex. This is something we cannot compromise.”

Kueh said this meant someone must be manning the complex round-the-clock.

“Will the complex be able to provide that kind of service? That is our main concern.”

He added it would be a disaster if the facility operated only from 8am to 5pm and is closed during public holidays and weekends.

Kueh said his fishing boats now unload at Kampung Gobelt in Muara Tebas. The wharf there was convenient because there was no traffic jam and the fishes caught could be sent to town for distribution promptly, he said.

“The LKIM complex is also not far from town, but from the complex to town, we have to pass the Kota Samarahan area. That stretch is well-known for traffic jam.  That is also a concern.”

The Kotak Fishermen Association, he added, would hold a meeting soon to discuss this issue.

The Borneo Post on Wednesday front-paged the story `Private fishery jetties banned soon’. The article quoted Deputy Chief Minister Tan Sri Datuk Amar Dr James Jemut Masing as saying that all private and illegal jetties around Kuching that were used by local fishermen to land their catch would be closed once the complex in Tanjung Bako is completed in July next year.

“The reason they (fishermen) don’t (land their catch at designated places) at the moment is because there are many private and illegal jetties. Catches are unloaded there and sold to other places or to so-called `mother ship’ in the ocean,” said Masing.

Meanwhile, Kuching Fishing Trawlers Association chairman Chang Siak Hock, when contacted, said he was concerned about the fees to be imposed.

“I believe we will be charged a substantial amount of fee for using the complex.  Furthermore, I think we will also be taxed for every kilogramme of fish we caught,” he said.

Chang also wondered whether the complex would have all the facilities they needed, such as those involving ice.

“Our members will meet to discuss this issue. In the meantime, we won’t be issuing an official response, yet,” said Chang.

Currently, fishermen in Kuching are using the wharf at Kampung Gobelt, Padungan, and two wharfs at Bintawa (run by Kotak Fishermen Association and LKIM respectively) to unload their catch.