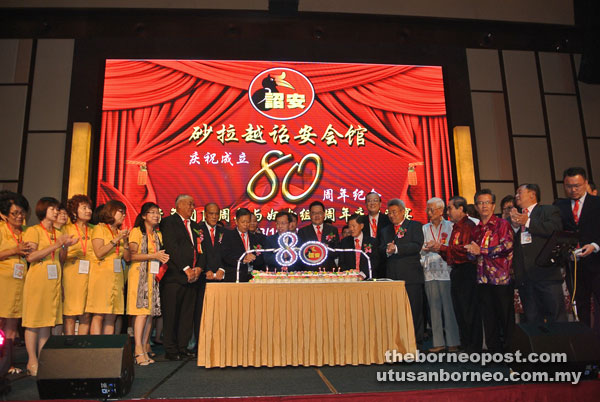 Dr Sim (ninth from left), flanked by Tan on his right and Chan, and others at the cake-cutting ceremony. Kho is sixth from left. — Photo by Hiew Man Chien 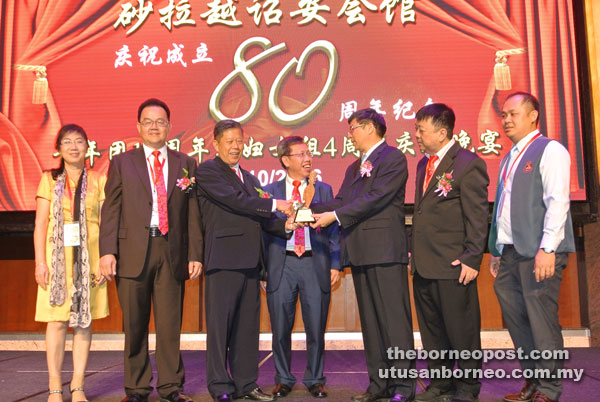 Tan (third from left) presents a memento to Fu. Dr Sim is at centre while Chan is second from left.

KUCHING: Sarawak Chawan Association must continue to promote their dialect, particularly among the young generation, in order to preserve the community’s heritage.

Minister of Local Government Datuk Dr Sim Kui Hian, who gave the advice during the association’s 80th anniversary dinner here on Saturday, said: “We need to preserve our dialect as this is part of our culture, or it will be lost with time.”

He suggested the association organise dialect-related activities for grandparents and grandchildren since their parents were often too busy with work.

Dr Sim, who is also the organisation’s vice chairman, said he was pleased the association had been active in the annual Kuching Festival Food Fair by offering Chawan delicacies.

He believed this helped promote the community’s traditional delicacies and culture.

On the last 80 years, he said the Chinese community had done a lot for the state.

“Be it Chawan, Foochow, or Hakka, we are all Chinese of Sarawak. Let’s contribute more to develop Sarawak.”

On history, he reminded the community to keep proper records as “history is our legacy.”

“We shall not forget that our ancestors hailed from China, but at the same time, we are Sarawakians. I am proud of the achievements of China today.

“Let us maintain a close relationship and business ties with our counterpart in Peninsular Malaysia, Singapore, and China.”

Meanwhile, the association’s chairman, Tan Jit Kee, said the Chawan community migrated from China to Sarawak over 100 years ago.

He said one of the two aided Chinese primary schools that used to be under the care of the association was Kuching Chung Hua Primary School No 5.

“Our ancestors placed great emphasis on education. I hope young Chawans would emulate this spirit and carry on the tradition of supporting Chinese education.”

Over 1,000 Chawans from across the state, Peninsular Malaysia, Singapore, and China were at the gathering, which marked the success and contributions of the Chawan community in Sarawak.