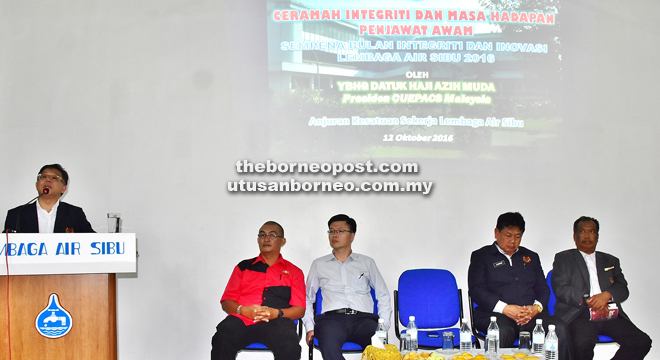 SIBU: The Congress of Unions of Employees in the Public and Civil Service (Cuepacs) has called on civil servants at all levels to practise a high level of integrity.

Its national president Datuk Azih Muda said by practising a high level of integrity, they would do what was right even though no one was watching.

“With integrity, they will be able to bring their respective departments and agencies towards greater heights.

“They will be able to achieve their vision to serve the people with high quality services,” he said at a talk on ‘Integrity and Civil Service Future’ at the Sibu Water Board hall yesterday.

The talk was held in conjunction with ‘Sibu Water Board Integrity and Innovation Month 2016’.

The programme, organised by the Federation of Sibu Water Board Employees, was participated by various government departments and agencies here.

“If we all serve with integrity we will be guided by a set of core principles that will empower us to behave consistently on high standard. The core principles of integrity are virtues such as respect, dependability, trust, honesty, wisdom, compassion, kindness, loyalty, objectivity and maturity,” he added.

Azih added that virtues were valuable personal and professional assets employees could have and bring to work everyday.

Cuepacs would, meanwhile, continue to fight for the rights and welfare of civil servants in the country, he added.

The fight would include the increment of their salaries, bonuses and other benefits so as to lighten their burden in the current economic situation.

He added that Cuepacs would strongly urge the government to increase the salaries of civil servants because public sector workers in Malaysia were faced with a big disparity between the high cost of living and the salary received.

Azih acknowledged that the country’s current financial situation was not very stable but this was not an excuse for the government not to announce a salary increase for civil servants who had shown their commitment in performing their duties and responsibilities.