Monday, January 24
You are at:Home»News»Nation»Najib: Five catalysts to make 2017 ‘Year of Internet Economy’ for Malaysia 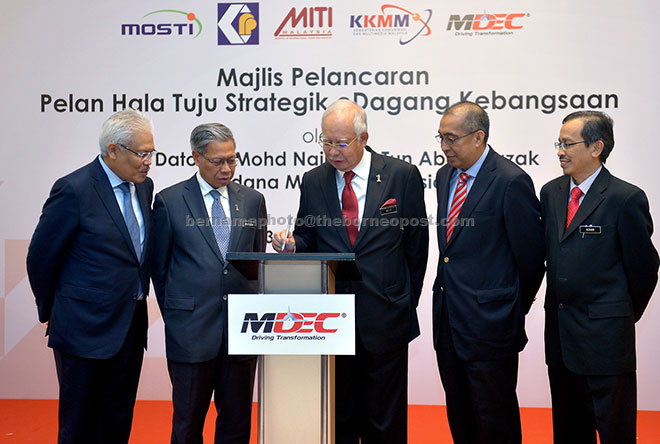 The catalysts – physical microcosms, risk capital funding, connectivity, talent and regulatory framework – were keys to the agenda, he said.

“Digital revolution is upon us at lightning speed, so we must embrace and adapt to change,” he said at the closing of the 28th MSC Malaysia Implementation Council Meeting (ICM) here yesterday.

Najib, who is also ICM chairman, said of the five, the creation of physical microcosms catalyst stood out.

“It is a cluster, or community of digital hubs, where a new bread of Internet economy, mainly start-ups, scale-ups and small and medium enterprises connect, converge, share and create ideas,” he said.

“The cool generation like hipster cafes and unconventional office space like warehouses. The ICM today endorsed the proposal to establish and promote ‘Malaysia Digital Hub’,” he said.

Under MDEC, Najib said, the digital economy’s contribution to the nation’s gross domestic product (GDP) had increased over the years.

“As a result of MDEC’s relentless commitment, Malaysia’s digital economy’s contribution to the GDP has already reached 17.8 per cent in 2015. We have almost hit the 18.2 per cent target which we set for 2020,” he added.

To-date, Najib said, MSC Malaysia had recorded RM304 billion in investments since its inception and created close to 160,000 jobs, a marked increase of 16 per cent from the previous year.

To encourage the setting up of these hubs, Najib had ensured a simpler and faster approval processes by introducing a new category under MSC Foreign Knowledge Worker, which will complement the establishment of the Malaysia Digital Hubs.

The new category, to be known as Tech Foreign Knowledge Entrepreneur, which will be approved by the Communications and Multimedia Ministry, would facilitate the entry of global entrepreneurs into Malaysia.

The allocation would be used for Big Data Analytics (BDA) Talent Development and Empower Women Leadership through data science and information and communication technology (ICT).

It was reported that the roadmap was aimed at doubling the country’s e-commerce growth to 20.8 per cent by 2020 from the current 10.8 per cent. — Bernama