Wednesday, January 29
You are at:Home»News»Sarawak»Centre rejoices with two orangutan babies in three weeks 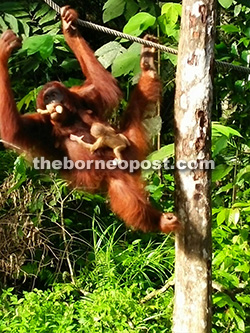 Selina with her new-born clinging on tightly.

KUCHING: Semenggoh Wildlife Centre is again in celebratory mood after it was presented with a second bundle of joy, an orangutan baby yesterday, barely three weeks after one was born on Sept 16.

Sarawak Forestry Corporation (SFC) announced that Selina, 12, showed up at the feeding platform in the afternoon of Oct 9 with her first offspring.

Pregnant Selina was last seen on Oct 2 and when she returned to the feeding platform on Oct 9, she had a male baby clinging onto her.

The management of Semenggoh Wildlife Centre believed that

Oct 6 was the most likely date of birth of the new addition to the centre. Mother and child look healthy and mother is eating well. With these two births, the centre now has 28 free-ranging orangutans in the forest of Semenggoh Nature Reserve where the centre is located.

The rising population of orangutans at the centre speaks volumes of the soundness of its rehabilitation programme.