Thursday, October 22
You are at:Home»News»Sarawak»Sizzling Sunday for firemen 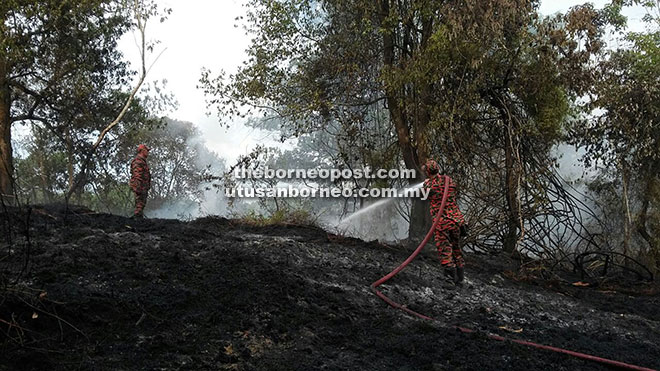 SIBU: Firefighters had their hands full on Sunday as they raced against time to contain 12 cases of open burning across the state amidst soaring temperature.

Sighing a relief, Fire and Rescue Department (Bomba) assistant director (operations) Farhan Sufyan Borhan, said fires in all the affected locations had been extinguished except that in Bintulu.

He told The Borneo Post yesterday that the operation was still continuing with 15 firemen from Bintulu Fire Station backed by the land developer’s workers, braving heat to put out the fire that ravaged 20 hectares of land at an oil palm plantation near the Bintulu airport.

According to Farhan, the fire at the plantation had been burning since Oct 15.

Farhan revealed that there were four cases of open burning yesterday, of which three were in Sibu and one in Bintulu.

“As of now (press time), the operations are still continuing,” he said, adding that further information could only be obtained upon completion of the operations.

“Most of the cases (of open burning) were caused by agriculture activities, where people took opportunity to clear their land through open burning due to the hot weather yesterday (Sunday),” he said when asked on the causes of opening burning involving bush and forest fires on Sunday.

Nonetheless, Farhan added this was not the most number of cases of open burning recorded in a single day.

“I recall before this, we recorded more than 30 cases (of open burning) in a single day,” he noted, adding that there were five cases of open burning in Sibu on Sunday.

Turning to their fire fighting approach, Farhan said in the case of open burning, they normally made use of the open water source which at times was located far away from the scene.

“In fact, in some cases, (it is located) more than 1km (away) so, we have to do relay pumping,” he explained.

Elsewhere in Sibu, firemen had their hands full on Sunday as they rushed to several locations due to the occurrence of bush fires.

Firemen were seen walking up a hill to put out forest fires along Mile 12 Tunku Abdul Rahman Road, while bush fire also occurred at an open space near Pulau Li Hua.

Towards this end, Farhan hoped that landowners doing open burning for agricultural purposes, control the spread of (fire) so as not to inconvenience residents nearby.

He also said that open burning by commercial farmers could only be done with permission by NREB (Natural Resources and Environment Board).