Sunday, November 1
You are at:Home»Business»Sarawak has vast potential to be major ecotourism destination 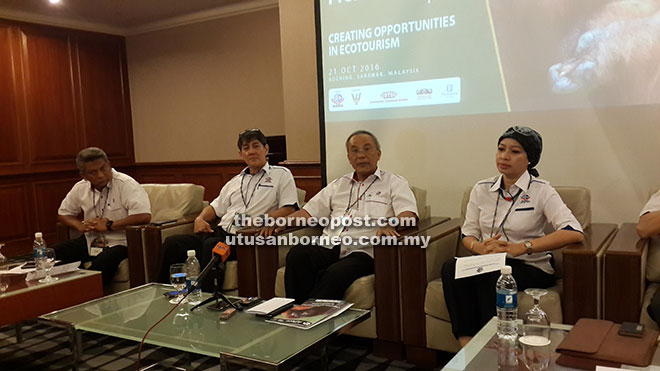 (From left) Rohizam, Kon, Hamzah and Dayang Azizah brief reporters on APeco 2016 during a press conference held at a hotel here yesterday.

Malaysian Association of Tour and Travel Agents (Matta) president Datuk Hamzah Rahmat pointed out that the various attractions available in Sarawak – for instance national parks and wildlife centres – are niche products that has the potential to be developed further to pull more tourists to the state.

“It is a niche product and is very good for Sarawak because Sarawak is a complete package.

“The nature itself added with the culture of the people here are crowd pullers. Besides, ecotourism is a product which commands a premium price.

“Therefore, Sarawak should continue targeting ecotourism and make it a real product for the development of the tourism industry,” he told the media during a press conference after the opening of the 9th Asia Pacific Ecotourism Conference (APeco) 2016 held at a hotel here yesterday.

Hamzah observed that there are jungles and natural reserves which have been in existance for thousand of years in Sarawak and Malaysia.

Thus, Hamzah believed it is of great importance to conserve and preserve the environment and what are available in the state for the benefit of the next generations.

In that aspect, he reminded travel agents and tourists in particular local visitors of the responsibilities to maintain the facilities being built at tourist sites.

On another note, Hamzah said the volume of tourists targeted for ecotourism should be manageable as it is important for monitoring and preservation efforts.

He is confident that the background and experience of the local travel agents will be doing a good job in promoting ecotourism to other countries.

Apart from that, Matta Sarawak Chapter’s chairman Chris Kon believed with the abundance of natural parks and wildlife centres in Sarawak, there are more business opportunities to be created and boost the tourism industry in the state.

Meanwhile, Matta deputy president Rohizam Yusoff observed that the state government has done a lot for the conservation and preservation of the natural heritage in the state.

“Matta applauded the state government’s efforts of conservation of Sarawak’s nature and its (historical) heritage.

“Sarawak has done it step by step and it is not an easy one especially creating a balance between economic growth and the social responsibilty of taking care of the nature and environment,” he said.

Additionally, Matta’s honorary secretary general Nigel Wong believed Sarawak has a good combination of natural and cultural attractions which can be promoted to certain groups of tourists.

He explained that the conference was aimed to highlight opportunities for ecotourism to the delegates who attended the event.

Themed “Creating Opportunities in Ecotourism”, the conference held from October 21 to 23 is being attended by appproximately 150 delegates from around the world.

Organising chairman of the conference Dayang Azizah Abang Zaidan in a statement said APeco 2016 is a perfect platform in creating awareness to promote ecotourism standards in the tourism industry and opportunity to educate, share and exchange ideas and knowledge about ecotourism.

She explained that the conference features a variety of relevant subjects presented by 21 international and local speakers which are beneficial to the registered participants and all stakeholders involved in the ecotourism industry.

She believed that Sarawak is the right place to hold the conference as the state is marketing ecotourism aggressively with the rich endowed green environment.

Dayang Azizah observed that the conference will end with a field trip to Semenggoh Wildlife Centre and Sarawak Cultural Village Kuching.

She shared that participants might have a chance to learn on the management of the centre and experience the orang utan feeding session during their visit there.

Previous ArticleNeutral on auto sector despite Proton’s push
Next Article Govt to create new tax scheme for companies in 2017, 2018