Saturday, September 26
You are at:Home»News»Nation»Fire believed to have started from ICU’s treatment room 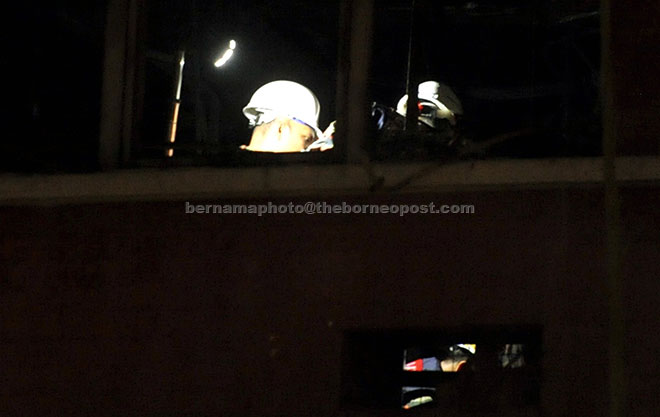 JOHOR BAHRU: The fire that claimed the lives of six people at the Sultanah Aminah Hospital (HSA) yesterday was believed to have started from its treatment room in the Intensive Care Unit (ICU) before spreading to the entire ward.

Health Minister Datuk Seri Dr S Subramaniam said it was also believed that the blaze was not easy to put out and was spreading too fast due to the presence breathing apparatus which contained oxygen gas that had been used by patients in the ICU.

“Efforts to save all patients were made. Since the fire spread too fast, some staff who were on duty suffered from difficulty in breathing and some fainted due to thick smoke,” he told a press conference here yesterday.

Dr Subramaniam said the ministry would wait for a full report from the Fire and Rescue Department before taking further action.

Meanwhile, in a statement earlier, he said the ministry would get to the bottom of the tragedy by appointing a special committee comprising the relavant agencies and team of experts.

“We’ve been informed that the rapid spread of the fire and huge columns of smoke had hindered the rescue efforts,” Dr Subramaniam said.

The six people who perished in the fire that broke out just before 9am yesterday were all ICU patients. The seventh patient was rescued.

At the press conference, Dr Subramaniam said that he hoped that the victims’ families and their next-of-kin would remain strong despite the tragedy.

At the same time, he had instructed the hospital’s staff to render any kind of assistance needed by the families of the victims.

“As an institution that provides healthcare to patients, we’re certainly very saddened by this incident. We’re asking the public not to speculate about the cause of the fire,” he said.

Asked whether safety checks had been carried out at the hospital, Dr Subramaniam said it had always been conducted and in fact, the ministry itself has a dedicated team to monitor such matters.

Dr Subramaniam thanked the fire and rescue crews for preventing the blaze from spreading to other parts of the building, and HSA staff for evacuating 467 patients to safety.

Health director-general Datuk Dr Noor Hisham Abdullah, in a Facebook posting, said a detailed briefing on the fire was provided by HSA staff as well as fire and police officials during a visit by the minister, Health secretary-general Datuk Seri Dr Chen Chaw Min and himself to the hospital.

“The fire started at the treatment room in the ICU before it became uncontrolled and spread to the rest of the ICU,” he said.

He said the water sprinklers were triggered and hospital staff tried to control the fire with available fire extinguishers before the Fire and Rescue teams arrived to control the situation.

“Their efforts managed to contain the blaze at this floor from spreading,” he said. — Bernama