Wednesday, July 28
You are at:Home»News»Sarawak»750 delegates from 11 countries attend summit 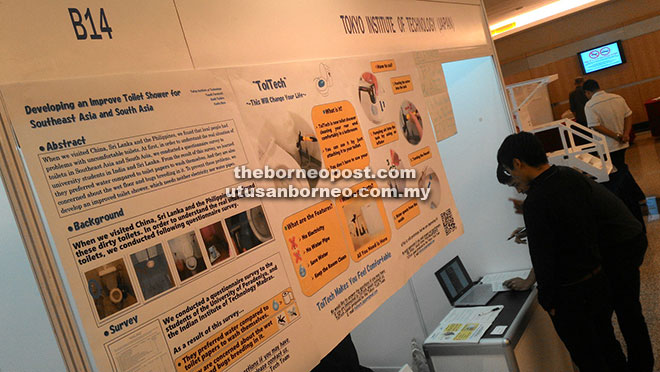 The Tokyo Institute of Technology’s booth at the exhibition provides information on approaches to improve toilets in Southeast Asia and South Asia.

KUCHING: More than 750 delegates from 11 countries are attending the 15th World Toilet Summit and Expo 2016 here, which ends today.

The event held for the first time in Sarawak was organised by Kuching South City Council (MBKS) and supported by the state government,

The keynote address on this year’s theme, ‘Happy Toilet, Happy City’ was presented by State Secretary Tan Sri Datuk Amar Morshidi Ghani on the first day of the three-day summit.

The summit which has been held in 15 countries in four continents since 2001 is attended by an estimated 10,000 delegates representing governments, private organisations and non-governmental organisations.

The summit is a platform to share, hear and learn from international speakers and experts concerning topics based on this year’s theme.

Topics for the seminar included World Toilet Revolution, Role of Non-governmental Organisations in Social Reform Movements, and What Can Asean Do to Solve the Sanitation Crisis.

Panel discussions were held on topics such as Government Policies on Sanitation, Decentralised Sanitation Systems, and Sanitation Health and its Impact on Tourism.

Exhibitions were held at Imperial Hotel during the summit.

Some of the notable exhibits came from Weida, a market leader in sewage treatment system and Tokyo Institute of Technology.