Wednesday, January 29
You are at:Home»News»Sarawak»Sarawak Regatta a welcome boost for tourism — Abg Jo 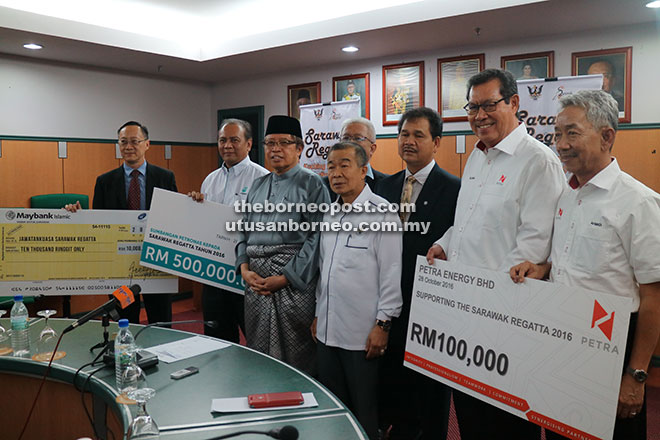 Abang Johari (third left) with (from left) Shukarmin, Ik Pahon and Naroden in a photocall with the sponsors.

KUCHING: The Sarawak Regatta- Kuching Waterfront Festival on Nov 11-20 will bring positive impact to the state’s tourism industry and the economy.

Deputy Chief Minister Datuk Amar Abang Johari Tun Openg, said the regatta would bring great impact to Kuching and the state in general with the participation of 7,000 paddlers comprising among others 800 international paddlers from 26 teams participating in the International Dragon Boat Race category.

“The regatta will result in increase of consumption due to the presence of huge number of tourists.  This is part of our efforts to transform our economy through tourism which is a growing industry,” Abang Johari, who is also Minister of Tourism, Arts and Culture told a press conference at Wisma Sultan Tengah in Petra Jaya yesterday to announce the Sarawak Regatta 2016 carrying the theme ‘The Race For Harmony’.

Abang Johari added that the state could not rely on oil and gas only, but had to diversify through tourism and other sectors. The regatta, he added, would also provide a platform for the state to showcase its diverse culture.

Five categories will be competed for in the International Dragon Boat Race, four for international teams and one for locals, which offer a total cash prize of RM45,000.

The highlight of the regatta is the ‘Piala Raja Sungai’ on Nov 20, which offers a cash prize of RM10,000.

Abang Johari said several side activities were also in the pipeline. Among them were a Sarawak Kitchen to be set up by Entrepreneur Development and Halal Industry Unit in the Chief Minister’s Department and the sale of handicraft.

He added that the state government was giving RM400,000 and the federal government RM200,000 to organise the regatta.