Tuesday, January 21
You are at:Home»News»Sarawak»Car, van go up in flames in separate incidents 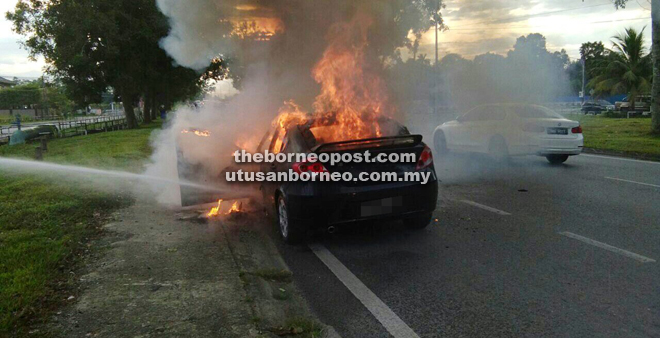 The car engulfed in flames.

The first incident at Jalan Stutong Baru occured at 6.40am when the driver and his passenger were forced to abandon the car and flee to safety after flames emerged from the engine compartment.

A spokesperson of the Fire and Rescue Department (Bomba) said personnel from the Tabuan Jaya station were rushed to the scene after having received a distress call at 6.44am.

The firefighters managed to put out the fire and nobody was injured.

The second case involved a van, which caught fire at a section of Jalan Batu Kawah-Matang around 10.30am as the driver and his passenger were making their way towards Batu

Sources said the driver noticed smoke billowing from the van’s engine compartment as he was approaching Sungai Moyan. Upon seeing this, he immediately brought the van to a halt, before exiting to safety together with his passenger.

No injury was reported in the incident as well.