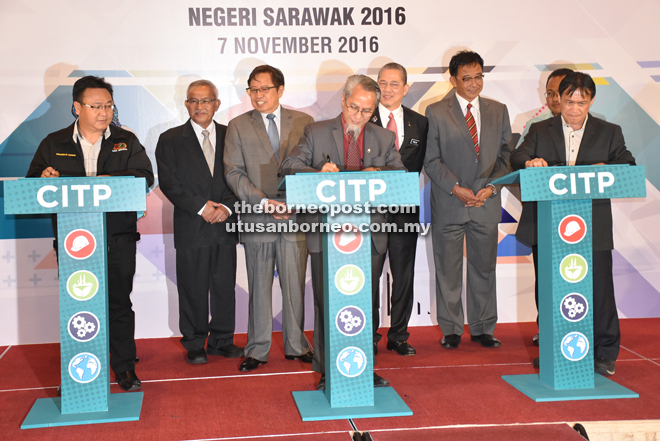 Signing the ‘Akujanji CITP’ are (from left) Shahrazi, Mohd Yusop and John as (back row, from left) Talib, Abang Johari, Fadillah and Abdul Karim look on. 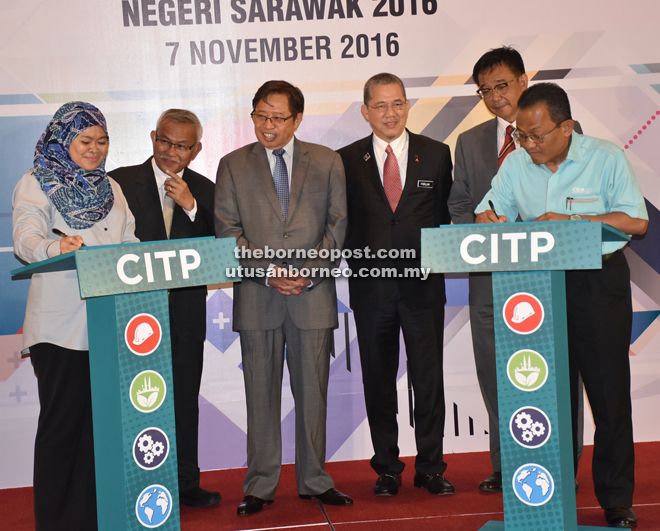 Yusfida and Ahmad Asri (right) sign the documents on collaboration between the ministry and CIDB, witnessed by (from second left) Talib, Abang Johari, Fadillah and Abdul Karim.

KUCHING: The Ministry of Housing and Urbanisation will announce a new policy at the upcoming State Legislative Assembly (DUN) sitting.

However, its minister Deputy Chief Minister Datuk Amar Abang Johari Tun Openg will only reveal details of the new policy during the sitting scheduled from Nov 21 to 30.

“I will announce a new policy at this DUN sitting. Not now ‘lah’ – later at DUN,” he told reporters after witnessing the signing of documents on the collaboration between his ministry and Construction Industry Development Board (CIDB) towards enhancing the construction industry performance in the state through the implementation of the Construction Implementation Transformation Plan (CITP) at a hotel here yesterday.

Earlier, Abang Johari talked about the state embarking on renewal programmes here, in Sibu and Miri.

“The major project in Kuching is Darul Hana (Development) involving 20,000 families who will be offered modern and quality housing at an affordable price and this will be undertaken by the Housing Development Corporation (HDC) and Daya Builders Sdn

Bhd. The infrastructure for this project has been developed and is almost completed, while construction works on the housing unit will commence in January next year.”

He added that Borneo Development Corporation (Sarawak) Sdn Bhd (BDC), which is also another agency under his ministry, would be involved in development projects in Serian – a new division in the state.

“We are also renewing the town in Sibu where the major projects are at Kampung Datu Baru and Kampung Nangka Baru as well as in Pujut, Miri, which we have identified as another area for us to develop,” he said, pointing out that the construction industry in the state was set to become ‘very vibrant’ in the next five years.

In view of this, Abang Johari said the collaboration between his ministry and CIDB was crucial to benchmark the quality of construction towards international standards.

“Once they have performed well in compliance with the standards and produce quality products, they should be considered for other projects that are offered by the government and private sector. I assure you that my ministry will also give top priority to those with this certification, including those who are using new approaches particularly the use of Industrialised Building System (IBS),” he stressed.

Meanwhile in his speech earlier, Abang Johari said his ministry through its three agencies – HDC, BDC and Daya Builders – was committed to continuously building quality homes that are safe and occupants-friendly.

“Hence, with the implementation of the CITP initiatives such as QLASSIC and SHASSIC, these will not only add value to the projects that our housing players undertake but they also provide a useful guide for the agencies involved in improving the safety and quality aspects of the construction and housing industry.”