Charles and Tracy having their photo taken with the Lang Tajit Waterfall as their background. 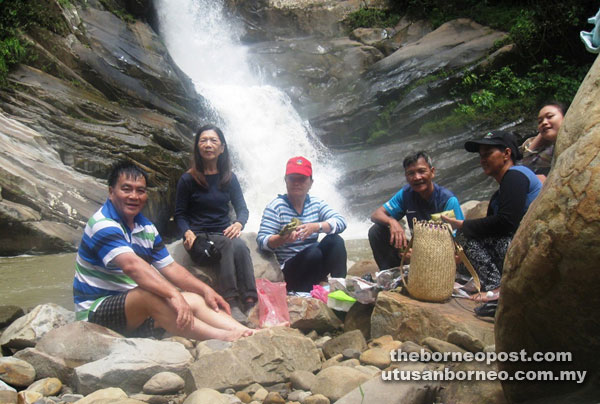 (From left) Charles, Aping, Tracy and the rest of the MCC team enjoy their breakfast at Lang Tajit Waterfall. 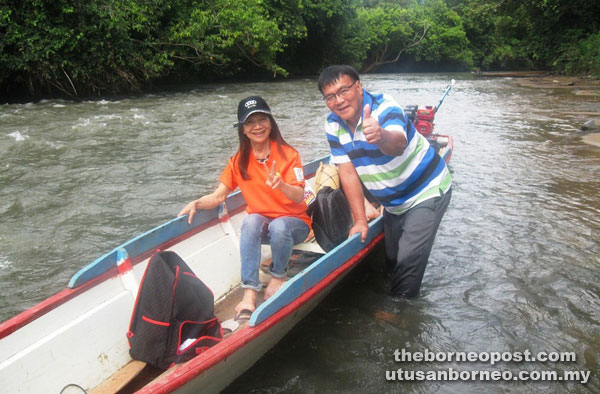 Charles pushes the longboat, with Aping on board, at Sungai Long Banga.

MARUDI: The Long Banga in the remote Upper Baram has a great potential to become one of the state’s ‘natural tourism treasures’.

This was highlighted by government pensioner, Charlie Tai Udau, who was the guide for a familiarisation visit by Councillor Aping Trang and her team from Miri City Council (MCC) to a number of interesting sites in and around the area.

According to Charlie – a Saban ethnic group member who previously served under the Marudi Agriculture Department – his home village has many natural wonders that have yet to be seen and experienced by tourists, especially those who are into eco-tourism.

“It (Long Banga) is quite remote – in fact, is one of the most remote settlements in Sarawak. Thanks Prime Minister Datuk Seri Najib Tun Razak, who visited Long Banga in July 2010, we now have a mini-hydroelectricity dam currently being managed by SEB (Sarawak Energy Bhd). This project is a good progress as now, there are many young folk who have come back to the ‘kampung’ (village) and operate a number of homestays for tourists,” he said.

The mini-dam was among the activities under the itinerary for Aping and her delegation.

However, the dam’s location was quite far from Long Banga – the journey took about four hours on board a four-wheel drive vehicle (4WD) – but the sight near there truly made everything worth it.

“It (dam) is at the upper reaches of Sungai Long Banga, quite near to the Kalimantan border. Walk another 15 minutes into the jungle and you would find the Lang Tajit Waterfall fed by Sungai Sekuan.”

According to Charles, lang Tajit is among two most popular waterfalls in Long Banga – the other is the 80-foot high Udau Waterfall.

“Those who are physically fit to climb the mountain there should try trekking, where they will be welcomed by the beautiful waterfall at the end of the trail. Alternatively, a journey on board a 4WD from Long Banga along the logging road will take you about 30 minutes to reach a junction and from there, you would need to hike up for another 45 minutes to reach the waterfall,” suggested Charles, who was accompanied by his wife Tracy Bulan during the visit.

Near Long Banga is a Kelabit village Long Peluan – a ‘kampung angkat’ (adopted village) of the government.

Long Banga itself has 120 households comprising Saban and Kenyah families.

These villages together with Long Beruang and Long Balong are all accessible via road from here and from Miri – except for the Penan settlement of Long Lamai, which can only be reached either via longboats along Sungai Lamai, or via a one-hour walk from Long Banga.

Aping and her team visited all these communities before heading to her hometown of Bario.