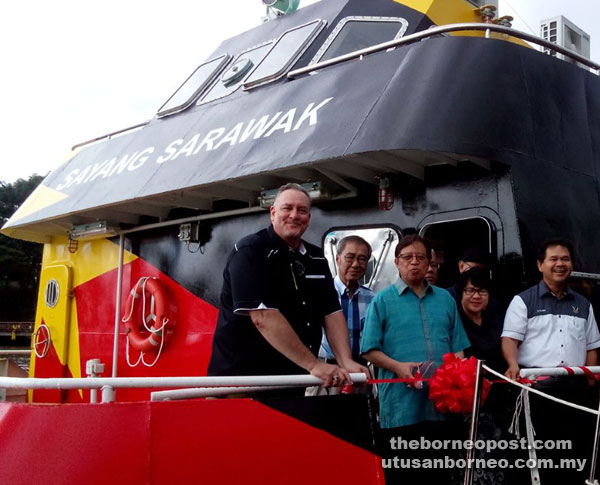 KUCHING: The newly-revamped Sayang Sarawak – a catamaran owned by the Ministry of Tourism, Arts and Culture – was unveiled at the Kuching Waterfront yesterday.

The watercraft now carries the colours of the Sarawak flag and also depicts various motifs on its main deck, making it standout at the waterfront.

The catamaran is being prepped to host offer cruise-style meeting and event services for next year.

“The Sayang Sarawak will definitely bring an added value to one of our state’s tourism products along the Sarawak River,” said Deputy Chief Minister Datuk Amar Abang Johari Tun Openg at the relaunch ceremony here, adding that the revamping of Sayang Sarawak would aptly coincide with the Kuching Waterfront Festival and Sarawak Reggatta today.

According to Abang Johari – also the Tourism, Arts and Culture Minister – this city will play host to the International Music Festival running from Nov 17 to Dec 17 this year, which will gather musicians from countries such as Singapore and Australia here for a month.

‘With the new look on Sayang Sarawak, it will give more colours to our state’s arts and culture,” the minister said.

At the official launch of Sayang Sarawak in January this year, Abang Johari disclosed that the catamaran was only painted in ‘a boring white’ but thanks to the management of the Borneo Convention Centre Kuching (BCCK) led by its chief executive officer Eric Van Piggelen, the makeover proved to be a success.

“We are delighted to partner with the Ministry of Tourism, Arts and Culture in bringing a niche product to the business tourism market and also to the Kuchingites. BCCK is the first convention centre in Malaysia – and possibly in the world– to offer cruise-style meeting and event services,” Van Piggelen in a press statement.

He also said BCCK would open the city’s first floating BBQ restaurant on board Sayang Sarawak in January next year as an expansion to the river cruise.

The floating restaurant would operate at Kuching Waterfront, serving international and local cuisines for up to 50 persons daily except Mondays. The decor would feature a ‘Cocktail Sundown Bar’ where patrons could enjoy a wide selection of beverages before proceeding to the cabin for dinner.