Thursday, June 4
You are at:Home»News»Sarawak»SWP hopeful of being accepted into BN 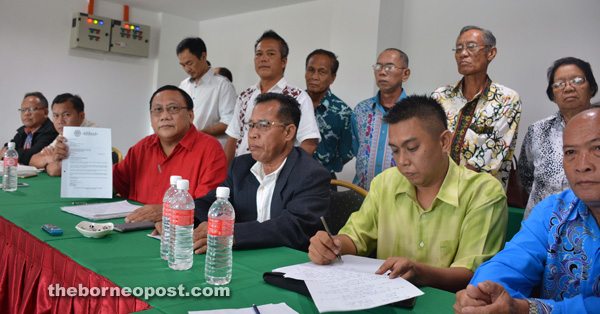 Munan (third left) shows the letter sent to BN pertaining to their application to join BN.

SIBU: Sarawak Workers Party (SWP) is hopeful that their application to join Barisan Nasional (BN) will be accepted as their sole intention is to work together in developing the state.

Speaking at the press conference after their Supreme Council Meeting here yesterday, its president Munan Laja said they were optimistic despite yet to receive any feedback on their application addressed to state BN secretary-general Datuk Dr Stephen Rundi on Sept 5.

“I am confident (our application will be accepted) because BN and government leaders have all this while been asking everybody to work and cooperate with them. We are positive,” Munan said when asked how confident the party was on their application to join BN.

During their third AGM in June this year, SWP made a resolution to apply to join BN.

With about 30,000 members across Sarawak, Munan said it was not adequate for the party to be just BN-friendly because they wanted to participate in the development of the country.

Munan said the party had not yet decided to field any candidate in the coming election because their primary concern now was to join BN.

Apart from that (joining BN) , he said the other agenda of the meeting was on the development of NCR land.

Meanwhile, during the meeting, David Munan was promoted to vice-president, Steven Kalai to treasurer-general and Brayun Entri to publicity officer.