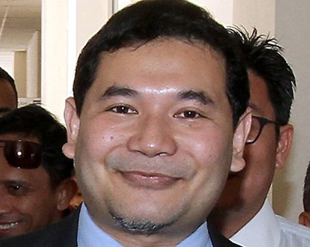 KUALA LUMPUR: Pandan member of parliament Mohd Rafizi Ramli was sentenced to 18 months in prison by the Sessions Court here yesterday for two charges under the Official Secrets Act (OSA).

The PKR vice president received 18 months in jail on the first charge of unauthorised possession of page 98 of the 1MDB Audit Report.

He was found guilty of committing the offence at the Parliament building lobby in Jalan Parlimen here at 3pm on March 24, under section 8(1)(c)(iii) of the OSA 1972, which carries a maximum jail term of seven years on conviction.

Mohd Rafizi, 39, who is also PKR secretary-general received 18 months in jail on the second charge of exposing the content of the report at a media conference at the same place and time on March 28.

The charge under Section 8(1)(c)(iv) of the same Act, carries a jail term of up to seven years on conviction.

Judge Zulqarnain Hassan ordered the sentence to run concurrently and granted a stay pending Rafizi’s appeal to the High Court, and raised the bail from RM3,000 to RM5,000.

In his judgement, Zulqarnain said the court found no doubt that Mohd Rafizi was in possession and had exposed page 98 of the 1MDB audit report.

that the accused not only knew but also made comments and was ready to take questions from journalists on the matter,” he said.

The judge said the accused had at the same press conference, read out every sentence and three paragraphs and footnote on page 98 of the 1MDB audit report.

“Therefore, the evidence from the press conference video, display of page 98 in his Facebook and blog showed that he knew about the secrets in the three paragraphs and footnote on page 98.

“Hence, the accused is not being prejudiced against even if it is true that not everything on page 98 had been revealed,” he said, adding that page 98 of the 1MDB Audit Report had been confirmed and classified as a secret by the Auditor-General.

Zulqarnain said the court found that Mohd Rafizi had committed an offence by exposing three paragraphs and one footnote on page 98 of the report.

“Evidence from the press conference, posting of page 98 on the accused’s Facebook and blog as well as his handphone

is very strong for the court to incriminate him with the charge,” he said.

“If we look at the provisions in the Federal Constitution, a member of parliament convicted of an offence and sentenced to jail for more than one year or RM2,000 fine would lose his position as MP.”

Gobind said should this happen to Mohd Rafizi, the constituents in Pandan would be most affected, and he could also lose his eligibility to contest in the next general election.

However, deputy public prosecutor Shukor Abu Bakar urged the court to impose an appropriate sentence that would serve as a lesson not only to the accused but also those intending to commit similar offences.

As someone with high status, he submitted, the accused should know the responsibility of respecting the country’s laws.

Cases of unauthorised disclosure of secret documents were on the increase and warranted serious attention, he said.

Shukor stressed that it was essential for the court as an independent body to play its role in sending a firm and effective message to society to be more mindful of their actions as they would not escape from the law.

Seven prosecution witnesses and Mohd Rafizi as the defence’s sole witness, testified during the trial.

Last Sept 1, the Sessions Court ordered Mohd Rafizi to enter his defence on the two charges after the prosecution succeeded in establishing a prima facie case against him. — Bernama