Saturday, July 11
You are at:Home»News»Sarawak»Kaohsiung City wants to stay connected with Kuching via direct flights 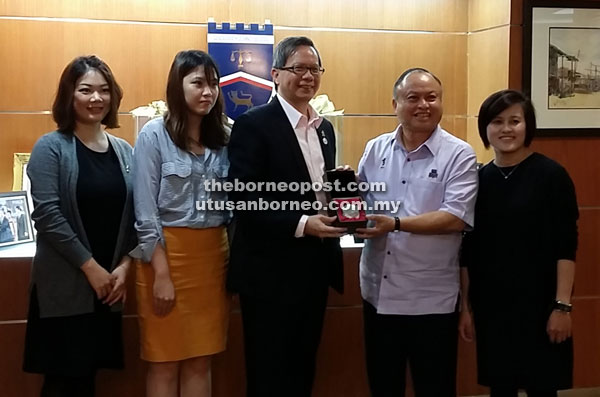 Cheng (centre) presents a memento to Chan. Looking on from left are Lee, Hung and Yen.

KUCHING: The Kaohsiung City government hopes to establish the Kaohsiung-Kuching direct flights to introduce this ‘beautiful Cat City’ to the people of Southern Taiwan.

According to Kaohsiung City Economic Development Bureau deputy director-general Jason Cheng, Kuching is such a beautiful city that he believes Southern Taiwanese would love to visit.

“It is too bad that there is presently no direct (flight) route between Kaohsiung and Kuching because Kuching city is so beautiful. I am very impressed as not only is the city clean, but its people are also friendly,” he said during a courtesy call on Kuching South Mayor Datuk James Chan at Kuching South City Council (MBKS) yesterday.

Cheng said he would deliberate the matter with tourism industry players as well as the authorities in Kaohsiung.

“First and foremost, we will have to persuade an airline or two to look into the feasibility of having the proposed direct route. Taiwanese would love to visit Kuching because I have a sense of familiarity after going around this city.

“Furthermore, there is no communication barrier as many people speak Mandarin in Kuching. I cannot help but feel comfortable.”

Asked on what impressed him the most, Cheng said the city was ‘full of green’ and the blue sky was ‘something some parts of the world couldn’t dream of’.

“(It’s) not just the greenery and the blue sky – I feel safe when walking around the Kuching Waterfront. Mind you, we did a walkabout at the waterfront an hour to midnight.”

He said the forum would strive to facilitate international cooperation between harbour cities, adding that Marseille (France), Liverpool (England), Antwerp (Belgium), Penang, Selangor and Kota Kinabalu in Sabah were among the participating cities.

“We are hoping to have a second forum on a larger scale with more cities in 2018. Hence, we have verbally invited the mayor (Chan) to be at the forum.”

The delegation arrived here last Saturday for the International Congress and Convention Association (ICCA) Congress, and will be leaving for Taiwan this Thursday.

Meanwhile, Chan welcomed the Taiwanese delegates to the state capital and hoped that they would be able to tour around the city ‘as much as possible’.

He was also pleased to note that the first charter flight via the Kuching-Taipei route would be launched by this Chinese New Year.

“The state government is very concerned about tourism and Minister (of Tourism, Arts and Culture) Datuk Amar Abang Johari (Tun Openg) is working so hard to have the direct flight to Taipei,” Chan said.