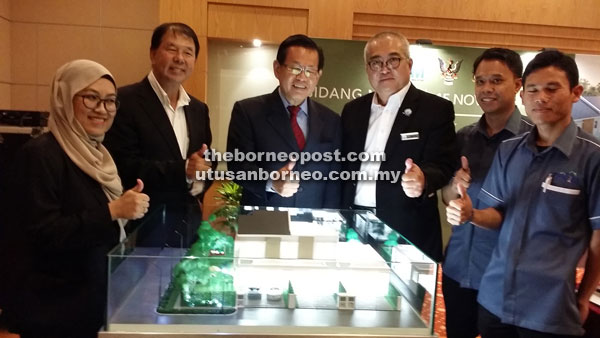 (From left) Fatmawati, Ting, Lee, Yii, Nor Asyrani and Mursyidul stand beside a PPAIM model house.

MIRI: Housing developers are urged to review the prices of their houses to make them more affordable, especially for the low-income group.

Assistant Minister for Tourism Datuk Lee Kim Shin, in making the call, said as the population was increasing the demand would surely continue to rise, hence more affordable houses should be built within a reasonable radius of the city.

On the PPA1M project undertaken by Pantai Bayu Indah Sdn Bhd, Lee said the state government supported it as it was targetted for civil servants in Sarawak.

It is the first such project implemented by the government at Eastwood Valley here. Application is open until Dec 1.

Lee hoped that civil servants here would grab the opportunity to buy the double-storey houses, specially built for them at 30 per cent lower than the market price. There are 1,075 double-storey houses to be built there and the earliest completed date would be 2018.

“At the moment, only 817 units are open for applications until Dec 1.

“So far, 600 people have already applied to buy the houses,” Lee said.

He advised those interested to apply via the websitte at: [email protected]

Lee said the location was very convenient – strategically located by the Pan Borneo Highway and not far from Miri Hospital, Miri Airport, schools and commercial centres.

“And the good thing about this project is that the successful buyers would only have to pay for the houses once they are completed, not while the work is in progress.”