Tuesday, July 27
You are at:Home»News»Sarawak»Wetland to be turned into a bird sanctuary 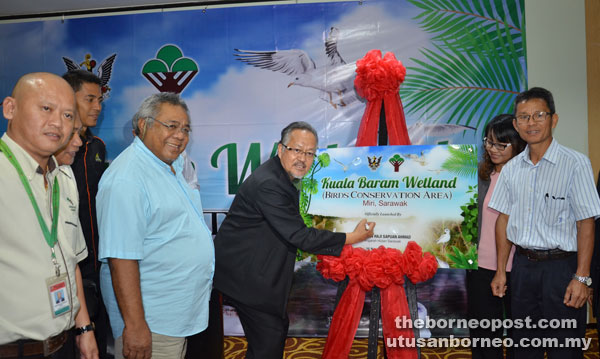 Sapuan signs the plaque as a symbolic gesture to launch Kuala Baram Wetland as a bird conservation area. Musa is at second left, front row.

Its director Sapuan Ahmad said this is because the wetland is home to migratory birds from the northern atmosphere.

Speaking at a press conference here after chairing a meeting on the Kuala Baram Wetland at Mega Hotel yesterday, Sapuan said to-date, a total of 132 migratory bird species have been sighted and recorded by a team of bird watchers from Malaysia Nature Society (MNS) Miri branch at the site including the world’s very rare bird species – Chinese Tern – which could hardly be found in other areas in the world.

“The idea to turn the Kuala Baram Wetland into a bird conservation area was mooted by Assistant Minister of Land and Air Transportation and Safety Datuk Lee Kim Shin two years ago.

“After knowing the said area has been alienated to private individuals, it is not an easy task for us to get back the land because we have to pay for the land cost. However, under the concept of bird conservation, there is no necessity to gazette the area as the land can still belong to the people but we have to work together for a win-win situation.”

He further said there were two villages in the area; namely Kampung Muhibbah and Kampung Masjid, and there were some squatters living along Sungai Sembilan, Kuala Baram.

“MNS Miri has identified some 600 hectares as potential areas for the bird conservation. Thus, we will treat this area like what we did in Bako where the lands still belong to the people and we engage them in the bird conservation efforts, which is good for tourism too.”

He praised MNS Miri for their extensive works in documenting the migratory bird species in the wetland.

“MNS Miri will share all the data and information on the bird species with us. We will use the information for verification works.

“Then, SFC will publish a book on the migratory bird species which are found at the wetland as well as print simple pamphlets to inform the people the importance of keeping the wetland well.”

On an unrelated matter, Sapuan said the Forest Department was planning to make a sediment build-up island near the mouth of Kuala Baram, locally known as Pulau Tikus, as a nature reserve.

However, they had to put the plan on hold as the state government wanted to link it with development activities in the area, he added.