Tuesday, September 28
You are at:Home»News»Sarawak»Why the petroleum development Act 1974 is in breach of the Malaysia agreement 1963 and the federal constitution and is null and void 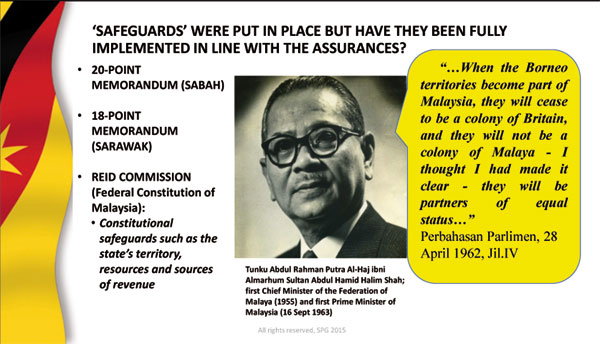 (a) Introduction: ‘Partners of Equal Status’

SARAWAK came together with Sabah, Singapore, and Malaya, supposedly partners of equal status, to form Malaysia pursuant to the Malaysia Agreement 1963 (MA63), with its territory, including its own Continental Shelf and all attached resources, intact.

The assurances of this fact and intent in the new federation were stated clearly by the new Prime Minister himself (fig.1), to allay any doubt as to the nature of the union between the parties concerned (quote) 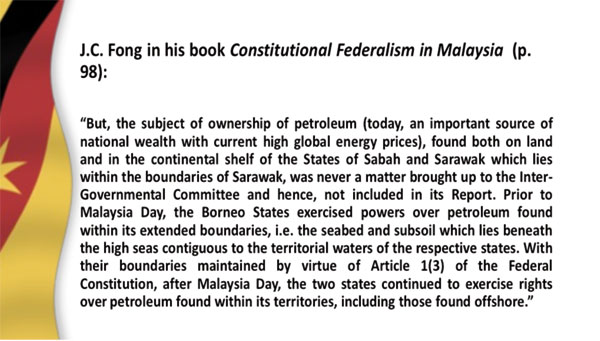 NOTHING at all was mentioned about Sarawak’s petroleum resources in Inter-GovernmentalCommittee Report or the subsequent Malaysia Agreement 1963. These naturally, legally and constitutionally came under the State just like land and other matters such as minerals thatwere included within that land.

As J.C. Fong, former Sarawak State Attorney General stated in his book (fig. 2), “the two states continued to exercise rights over petroleum found within its (sic)territories, including those found offshore”.

Those rights were to be taken away via the device of the Petroleum Development Act 1974, a device that although passed by Parliament, however did not follow a substantive provision of the Federal Constitution, and was therefore unconstitutional, null and void and of no legal effect. 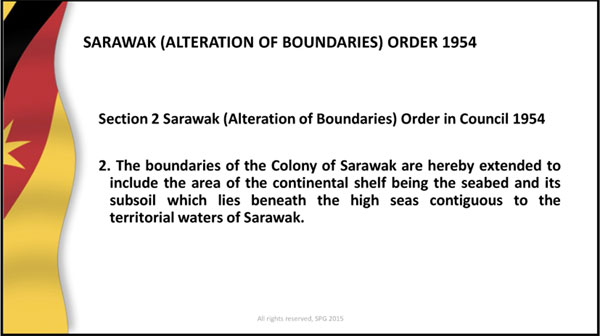 WHAT are the boundaries of Sarawak’s territory then, including its territorial waters, even before the formation of Malaysia? In 1954, Great Britain passed the Sarawak (Alteration of Boundaries) Order in Council that applied to Sarawak, which emphatically defined Sarawak’s boundaries to include the continental shelf, being the seabed and its subsoil (fig.3).

Needless to say, all mineral and other resources within that subsoil also belong to Sarawak. 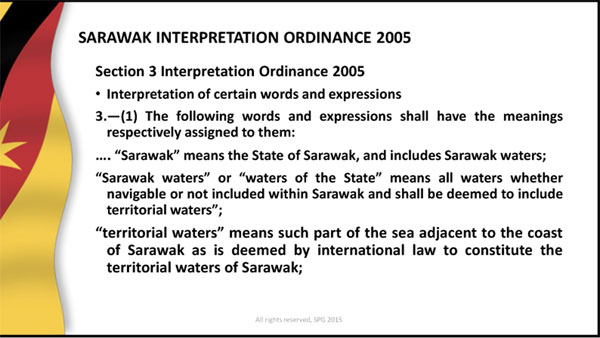 THE SARAWAK Interpretation Ordinance 2005 further clarified the expressions and words of the law to encompass the meaning of “Sarawak” as the State of Sarawak, including its territorial waters as deemed by international law (fig.4). 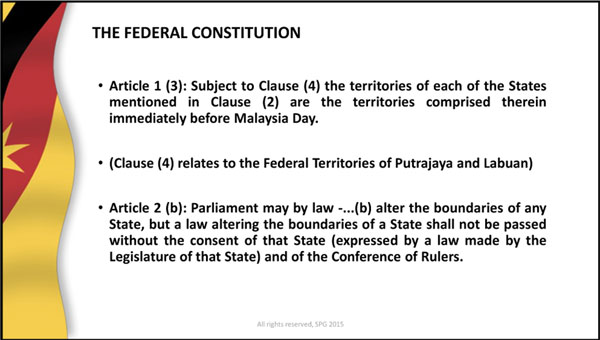 UNDER Article 2 (b) of the Federal Constitution, while Parliament may by law alter the boundaries of any State, it is expressly provided that such a law shall not be passed without the consent of the State (expressed by a law made by the Legislature of that State, in this case, Sarawak (and also the Council of Rulers).

Any such law passed by Parliament purporting to alter the boundaries of Sarawak is therefore clearly unconstitutional and therefore null and void.

This includes laws such as the Territorial Sea Act 2012 and the Petroleum Development Act 1974, neither of which were consented to by the State in the manner provided for under the said Article 2 (b) of the Federal Constitution. (fig.5) 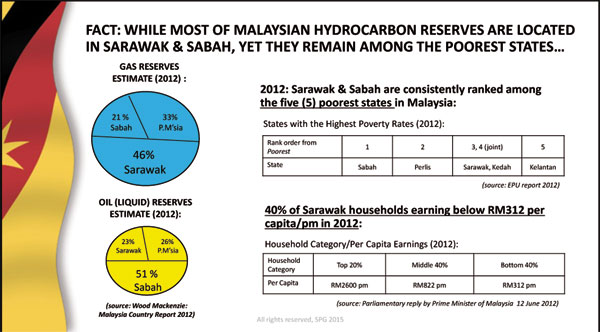 THE DEFINED territorial boundaries of Sarawak also apply to all resources, including petroleum, within those boundaries. As such no purported vesting of those resources in Petronas can have any validity without the consent of the State Legislature.

No such consenting law was ever passed by the Sarawak Legislature. Sarawak is therefore fully within its constitutional rights to take back its petroleum resources and manage the same on its own. The executive decision taken by the Sarawak Government at that time and the entire Petroleum Development Act 1974 law passed in Parliament can have no constitutional or legal effect without the consent of Sarawak’s Legislative Assembly.

All of Petronas operations in Sarawak therefore are arguably unconstitutional and illegal. The Federal Government must stop pretending that it or Petronas has any legal right or power over Sarawak’s petroleum resources, with regard to which there has been poor value creation as far as Sarawak is concerned.

Under the present Federal and Petronas regime Sarawak has been transformed from a territory with one of Malaysia’s richest oil and gas reserves into one of the poorest states in Malaysia. This was acknowledged by no less than YAB Prime Minister Datuk Seri Najib Tun Razak himself in a Parliamentary reply on 12th June, 2012. (fig. 6) 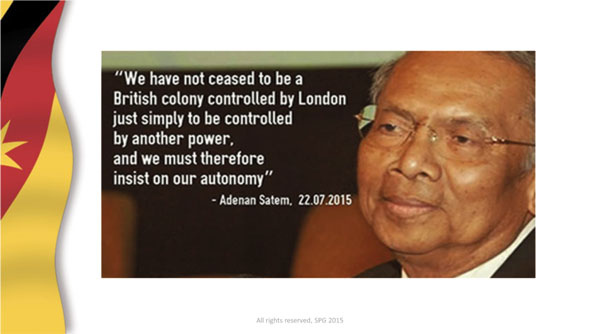 THE GLARING economic disparities and unabated massive development in Peninsular, mandates that Sarawak redirect more of its economic resources to develop itself for the sake of its future generations.

This situation was largely caused by the erosion of itsrights under the Malaysia Agreement 1963 (MA63) at the expense of Sarawak’s own valid interests and the welfare of its peoples.

Therefore the reinstatement of Sarawak’s right under MA63 is a primary remedy and in no way should be spun as a move for secession by politicians from the peninsular or their agents.

After more than 42 years of its precious petroleum resources being poorly managed by Petronas, it is time for Sarawak to set right the wrongful ‘vesting’ of its inalienable ownership rights to its petroleum resources. In line with its avowed intentions to seek economic parity for future generations of Sarawakians, the Suarah Petroleum Group (SPG) therefore wholeheartedly supports the Sarawak State Government, under the leadership of  YAB Tan Sri Datuk Patinggi Haji Adenan Satem in its efforts at the upcoming State Legislative Assembly sitting to restore the autonomy and resources of Sarawak that were usurped.

SPG calls upon all Sarawakians irrespective of their political beliefs or affliations to support the State Government’s efforts in this regard, for the sake of future generations of Sarawakians.