Friday, May 7
You are at:Home»News»Sarawak»Free wifi service for Kuching Waterfront area soon 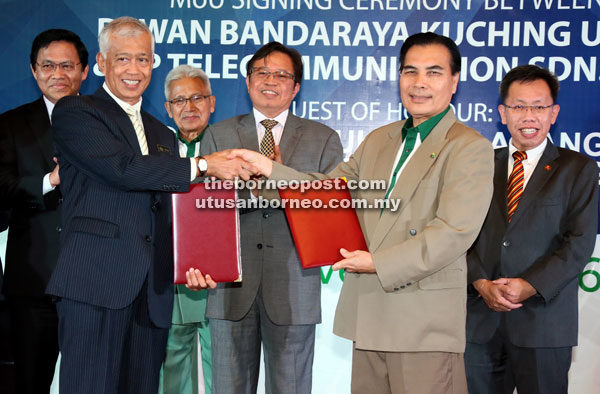 KUCHING: The area stretching from Kuching Waterfront to Padang Merdeka and Merdeka Palace will be provided with free wifi service within the next six months.

This project, to be implemented by PP Telecommunications Sdn Bhd (PPTelecom) at an initial cost of RM10 million, is part of a first phase initiative which will also see similar free wifi services at Sarawak General Hospital, Spring Shopping Mall and the Kuching International Airport.

Once successfully implemented, it will make Kuching the third city in Malaysia after Penang and Johor Bahru to provide free wifi services to its residents and visitors.

Following the signing of the memorandum of understanding (MoU) between PPTelecom and Kuching North City Commission (DBKU) yesterday, it will commence with the placement of 20 pilot public Internet Access points throughout Padang Merdeka and the Waterfront.

Deputy Chief Minister Datuk Amar Abang Johari Tun Openg, who witnessed the MoU signing and launch of the ‘DBKU Metropolitan Free Wifi’ project, said having this communication technology in the centre of Kuching city was timely because that area, particularly Kuching Waterfront, is a favourite spot among tourists.

Abang Johari, who is also Minister of Tourism, Arts and Culture, said availability of free wifi will provide tourists with great convenience for communication and business.

He pointed out that the first question often asked by tourists upon checking in at hotels would be passwords for wifi service because they need such service urgently.

“Tourism today needs these kind of services to be provided to our tourists. Later on I will request them (PPTelecom) to go beyond Kuching, that is to the Damai area which is another spot where we need all these services.

“If we were to migrate and position our tourism industry (on a higher level), you have to have this (telecommunication) infrastructure,” he told the media after the event held at a leading hotel here.

Meanwhile, PPTelecom managing director Datuk Abang Jemat Abang Bujang said each Internet Access point for the first phase of the project will have a speed of at least 5Mbps-15Mbps.

“If the traffic is going to grow bigger, we will increase it to 50Mbps or 150Mbps, as well as to increase the number of access points. This very much depends on the study conducted based on the clicks we receive (in the system),” he said.

To a question, he said the next phase of the project will also see the free wifi service extended to Satok and Petra Jaya, and many parts of Kuching but he refused to go into further details.

Earlier, in his speech, Abang Jemat said PPTelecom will work closely with two of its giant international partners – China-based IT company Foxconn and US-based Infocus and Fuyu – to ensure the success of the project.

He pointed out that PPTelecom’s aim and mission is to eventually provide free wifi throughout Sarawak in line with its tagline ‘Free Wi-Fi for the Rakyat’.

“PPTelecom views this project with due importance as it would entail a host of other benefits and not merely provide the much-awaited greater Internet connectivity for people in the city.

“For PPTelecom, it would certainly mark yet another historic milestone in the journey of its 10 years of existence,” he said.

It can also be an essential platform for security surveillance (CCTV) in line with DBKU’s ‘Clean, Beautiful, and Safe Enhancement’ plan, and the backbone for the ‘Kuching Smart City’ goal, he added.

“A large number of cities across the globe like Melbourne, New York, Seoul, Osaka and even in Malaysia are already offering free Internet connections through free city wifi technology. Even more are expected to follow suit. DBKU as administrator of Kuching North is now joining this bandwagon,” he said.

Previous ArticleNegotiations ongoing for devolution of powers to Sabah, Sarawak — Azalina
Next Article EC receives 501,799 applications for registration as new voters in Q3 this year