Monday, March 30
You are at:Home»News»Sabah»Stay away from rallies warning 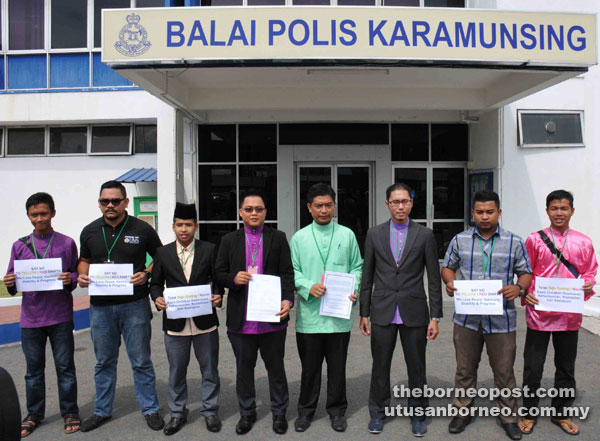 Chandra said the police would not compromise and would take stern action against anyone, including the organizers of Bersih 5 and Red Shirts, if they continued to stage the illegal rallies.

“Under Section 4 (2) (C) of the Peaceful Assembly Act 2012, it is stated that police have the authority and power to disperse any street protest with the use of force if necessary, but I hope it will not come to that extent,” he said yesterday.

Police presence will also be felt after police received information that the organizer of Bershi 5 rally would gather in three locations, namely in front of the Inland Revenue Board (IRB) building, Restaurant Sempelang in Sembulan and Taman Fortuna before walking to Taman Rimba Tropika Ujana, Luyang.

“Such street rallies or street protests will badly affect traffic flow and cause public disorder.

“We will make our presence felt and I will say it again…we will not hesitate to take action against anyone who goes against our laws,” said Chandra.University and college students are reminded to stay away from either the Bersih 5 or the Red Shirt rallies expected to take place today.

Meanwhile, Sabah Youth MP Azrul Ibrahim said both rallies by Bersih 5 and Red Shirts were not only against the law but would also cause unwanted incidents.

“I hope university and college students will not participate in either the Bersih 5 or Red Shirt rallies because they are clearly against our law.

“The gatherings are also seen as disturbing the peace and harmony of our society in Sabah, which is made up of various races and religions.

“We therefore urge university and college students to stay away from the rallies and instead concentrate on your studies for a brighter future,” he said after lodging a police report against the planned illegal rallies by Bersih 5 and Red Shirts, at the Karamunsing police station yesterday.

Previous ArticleTourism to get RM230.99 mln
Next Article Thousands to converge on Kuching Waterfront for Sarawak Regatta