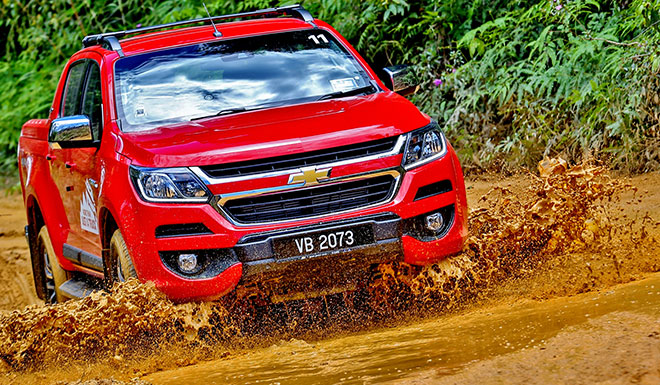 SIBU: Naza Quest Sdn Bhd, the sole distributor and importer of Chevrolet vehicles in Malaysia, is confident the All-New Chevrolet Colorado will become the favourite choice of pick-up enthusiasts in Sarawak.

Vice president of Naza Quest, Mohd Farid Rosli was optimistic that with the launch of the All-New Chevrolet Colorado, the Chevrolet trend will pick up. Notably with its segment technology –Siri® Eyes Free and voice recognition software allows the driver to give verbal commands and keep the hands on the wheel. This system ensures a Colorado lifestyle, allowing the driver to explore new roads at work and at play.

According to a press release, the Chevrolet Colorado is the first pickup truck in its segment to come with Apple CarPlay® applications to project a
simplified version of the smartphone screen onto the car’s colour touchscreen and remote engine start function.

“We invested an immense amount of energy, time and money to upgrade the performance of this All-New Chevrolet Colorado,” he said at the launch of the Chevrolet Colorado held at Huong Seng Motor Trading Sdn Bhd in Pahlawan Road yesterday.

Farid also divulged that they now have their own godown for Chevrolet spare parts.

It comes in 2.8L and 2.5L variants while the upgraded 2.8L Duramax four-cylinder turbo-diesel engine (VGT) has been tuned to offer better performance, improved fuel economy and lower emissions.

Safety remains Chevrolet’s main priority and Colorado reflects this philosophy with a host of active and passive safety features (depending on variants) including Traction Control System (TCS), Panic Brake Assist (PBA), Electronic Brake Force Distribution (EBD), Electronic Stability Control (ESC), Hill Descent Control (HDC) and Hill Start Assist (HSA). All these are in addition to the two front airbags –v along with a knee  airbag for the driver.