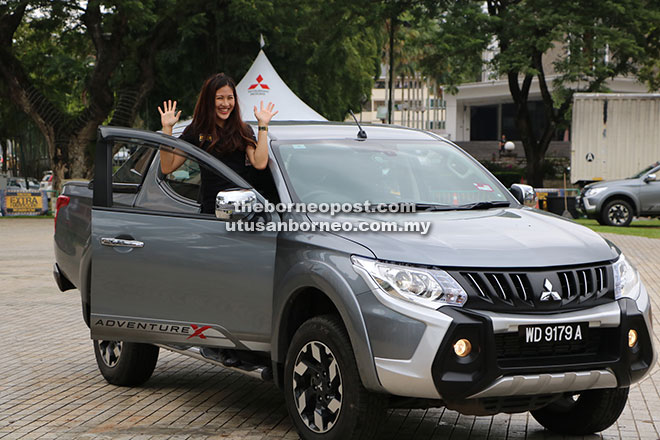 Leona waving to the crowd after unveiling the capabilities of the new Mitsubishi Triton VGT Adventure X.

Making a grand entry to reveal the new Mitsubishi Triton and its powerful Mivec turbo diesel engine was Leona who wowed the crowds with her drifting and precision driving techniques.

The thrill does not end there as Leona and Koh take turns to taxi members of the media and the public for a thrilling test ride around a mini gymkhana track while performing many different driving techniques.

“The Mistsubishi Triton has recently proven its capabilities, endurance and strength by completing the 26th Borneo Safari Off-Road Challenge in Sabah and we are very excited to bring some of these adventures for Sarawakians to experience the thrills themselves,” said Mitsubishi Motors Malaysia CEO Tomoyuki Shinnishi during a launching ceremony.

He also said Mitsubishi’s long experience in cross-country competition and proven success in conquering the toughest terrains, continuous refinements are made to improve the production of Mitsubishi vehicles.

“With the new Mivec Turbo Diesel engine, we are confident of meeting pick-up owner’s high level of expectations,” he added.

He also revealed that the new Triton is also the first pick-up truck in its segment to offer an aluminium alloy block diesel engine with Mivec variable valve timing technology.

“The previous 2.5 litre cast iron block was already powerful enough to conquer the Borneo Safari last year, so the development of the new Mivec engine was focused on reducing fuel consumption which our engineers managed to improve efficiency up to 15 per cent,” he added.

Also speaking after the drift session was Leona who said the new Triton’s engine is now capable of producing more power with an output of 181 PS (Pferdestarke (German/horsepower) and 430 Nm (Newton-metre) of torque.

“This is an upgrade which makes the new Mitsubishi Triton more powerful and fuel efficient. I simply love this vehicle,” said Leona who was also part of the recent 26th Borneo Safari Off-Road Challenge in Sabah.

Leona also commended on the new look of the Mitsubishi Triton VGT Adventure X (one of the six new Mitsubishi Triton variants) that now comes with a new shield extender for the front bumper, new sports bar with fullbox and dual tone 17-inch alloy wheels.

Meanwhile, the public is also invited to take part in the final day of the roadshow today, besides taking part in the taxi-drift with Leona and Koh. The public can also participate in an obstacle course which features a 45-degree, 25-feet tall sky ramp that points skyward.

Other challenges include the roller ramp test that will see the 4×4 vehicle ‘drive through’ the giant obstacle truck as well as the side traverse and uneven ramp tests.

After Sarawak, the roadshow will be travelling to Sabah in early January next year.