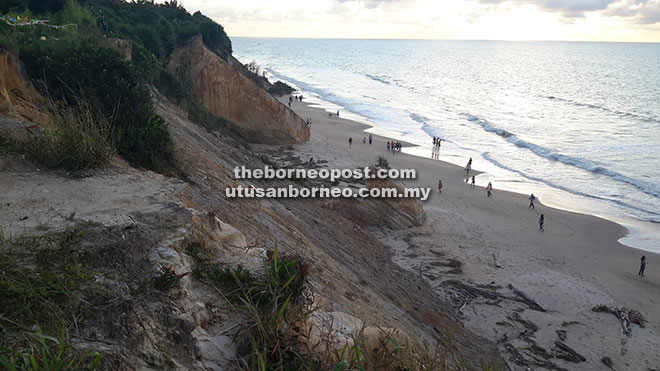 People stroll along Tusan beach in the evening.

MIRI: Tusan beach – a beautiful stretch of white sand with cliff and rock formations located about an hour’s drive from here – is a popular getaway spot for outdoor picnics and family outings during the weekend.

Local and foreign visitors and beachgoers from as far away as Kuching and Brunei drive out all the way there to witness the beautiful rock formations and watch the evening sunset.

According to a foreign visitor, Roselyn Asentista Galeon, the beach is very beautiful, attracting not only local tourists but also foreigners who like to see the natural beauty of the sand, rocks, sunset and blue seascape. 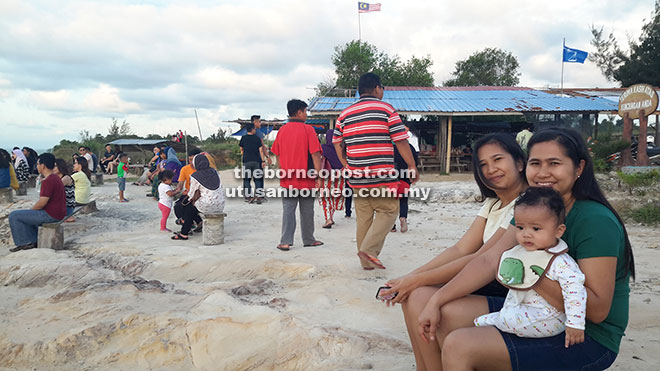 Tusan beach draws crowds of local and foreign visitors during the weekends.

She said the government should do more promotions to highlight Tusan beach to tourists in Europe, Japan, South Korea and the Middle East, such as offering various hotel packages to encourage them to visit.

“The Tusan beach is beautiful even at night and more promotions should be done to lure more tourists to come here,” she opined.

Expressing the same view, Siti Nekmah from Brunei said street lighting should be installed to light up the cliff area and the road leading to the beach at night.

She noted that the presence of a local music band performing at the beach on Sundays was an additional incentive for visitors to go there.

She suggested that the local council should set up more permanent stalls as well as amenities such as piped water for the public to use or  take baths with after swimming in the  sea.

At the same time, she said, lifeguards or People’s Volunteer Corps (Rela) personnel should also be stationed there now as more and more people are visiting the beach especially on Sundays.

Meanwhile, there are several food and drinks stalls which have been set up on top of the cliff, offering visitors local delights such as fresh coconut water and barbecued chicken wings.

The growing popularity of this pristine and serene beach has led the government to make it more tourist-friendly such as by providing toilets.