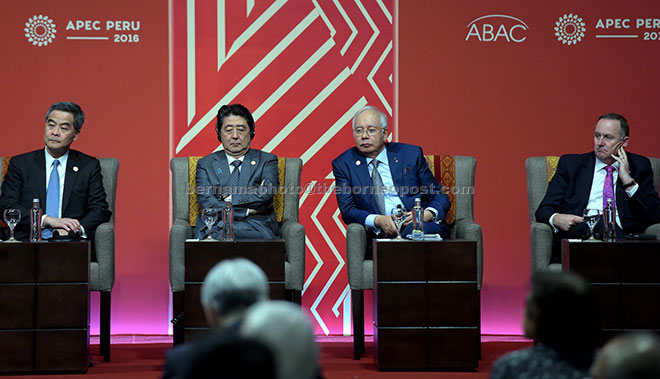 LIMA, Peru: Cooperation relating to irregular migrants are among the topics covered in bilateral talks between Malaysia and Australia on the sidelines of the Asia-Pacific Economic Cooperation (Apec) in the Peru capital on Saturday.

Prime Minister Datuk Seri Najib Tun Razak, who met with Australian Prime Minister Malcolm Turnbull, said during the meeting Australia sought the cooperation of Malaysia to curb the refugees issue which was affecting that country following the influx of irregular migrants.

“He (Turnbull) wants to stem this problem of irregular migrants that is related to human trafficking,” he told Malaysian journalists here after attending the first day of the Apec Economic Leaders’ Meeting.

“Among the cooperation are through the exchange of intelligence reports and interdiction, which is to take action if these irregular migrants passed through the territorial waters,” he said.

Furthermore, he said the region might face new threats if Mosul fell into the hands of Iraq and lead those fighting under the Daesh banner to return to Southeast Asia.

On the bilateral meeting with Papua New Guinea Prime Minister Peter O’Neill, Najib said his counterpart had invited Petronas to look into the possibility of developing onshore natural gas areas for LNG.

“The Prime Minister of Papua New Guinea requested Petronas to study these potential investments,” he said, adding that the latter also expressed his satisfaction on Malaysia for being among Papua New Guinea’s biggest investors.

Najib said Papua New Guinea also hoped Malaysia could assist in capacity building in that country’s preparation to host the Apec in 2018. — Bernama