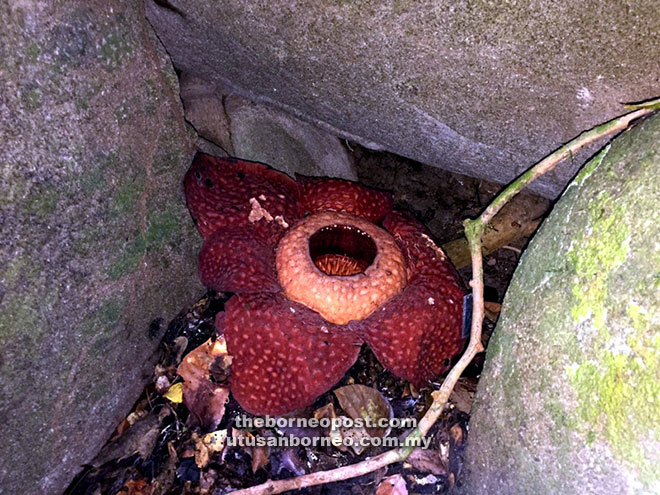 The Rafflesia at Gunung Gading National Park has six petals, where the norm is five petals.

LUNDU: The Gunung Gading National Park here was swarmed by nearly 200 visitors since Friday when its main attraction, the Rafflesia flower from the Rafflesia tuan mudae species, blooms.

The world’s largest flower started to bloom on Thursday (the first day of blooming process which normally takes up to six days) and is expected to continue until Tuesday (Nov 22).

Visitors have to walk about 300 metres or 20 minutes from the park’s office before getting to the location of the flower.

The officer in charge at the national park, Edmund Gering, 27, said the Rafflesia takes almost nine months to flower.

“This time the 70cm diametre flower has six petals, where Rafflesia normally produces five petals only. Each year  about 20 Rafflesia flowers will bloom in the park,” he said when met here yesterday.

Visitors who want to see the Rafflesia must register with the national park management and be accompanied by a guide before being allowed to visit the Rafflesia location.

Edmund said there are about 23 locations of Rafflesia flowers opened for visitors as they are easily accessible and had been marked by the national park.

When asked about the name of the species, Edmund said the name was given to Charles Brooke II who was referred as ‘Tuan Mudae’ in Malay. Gunung Gading National Park covers an area of 4,196 hectares and gazetted in 1983 to create a conservation zone for the endangered plant.

Located about 120km from Kuching, Gunung Gading, apart from the Rafflesia tuan mudae which is endemic to this national park only, is also famous for its waterfalls and pitcher plants. — Bernama