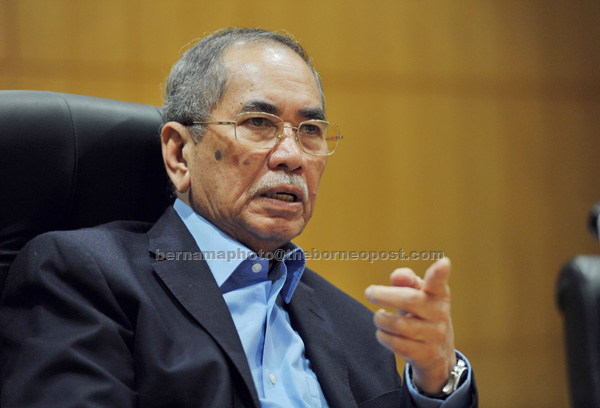 PUTRAJAYA: Datuk Seri Wan Junaidi Tuanku Jaafar yesterday called on all state governments not to issue or renew any logging licences in their respective states in a bid to protect the sustainability of the forest ecosystem and the environment.

The Natural Resources and Environment Minister said in fact he  had raised the matter at the recent National Physical Planning Council meeting, in which he also called on all quarters to stop tree-felling activities.

However, he said, so far, only Sarawak had stopped issuing logging licences.

“I hope other states will follow suit as there is nothing wrong for us to preserve our forest for eco-tourism purposes,” he said in response to the logging activities, which had been rampant in Gua Musang, Kelantan, which had cause a conflict between the state government and the Orang Asli community in the area.

He said the federal government had no power to control the state’s natural resources, including logging activities, let alone to overrule the state government’s decision.

He said this was suggested by Australia as the chair at the Tropical Rainforest roundtable meetings at the 22nd meeting of the Conference of Parties to the United Nations Forum On Climate Change (COP 22) from Nov 7-18 in Marrakech, Morocco.

Wan Junaidi, who leads the Malaysian delegation to the conference, said Australia was attracted to Malaysia Pavilion under the COP series, which highlighted the country’s achievements related to climate change mitigation and demonstrate its commitment towards the cause.

“So, we were asked on the possibility to host the Summit next year since Malaysia has shown its expertise and commitment on protecting high value rainforest ecosystem in the country.

“Besides, other countries would like to learn about our ability and capability in preserving our natural resources,” he told a press conference here yesterday.

Malaysia’s forest cover now stands at 54.5 per cent and at least 50 per cent of the total land area will be maintained as forest and tree cover. — Bernama