Saturday, August 20
You are at:Home»News»Sarawak»Villagers puzzled why firm was issued licence to extract timber on their NCR land 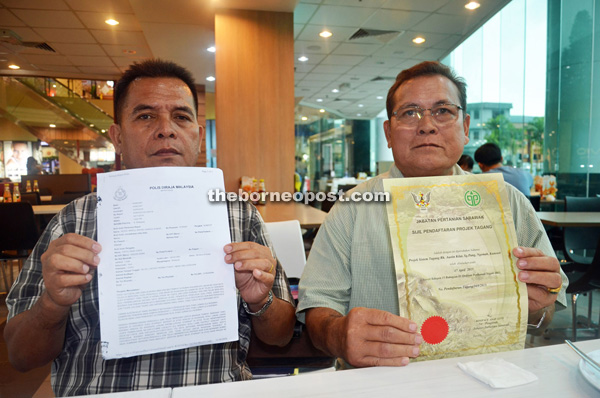 Entili (left) shows the police report while Pengiran is showing the certificate for the association’s Tagang system at Sungai Pang in Ulu Ngemah.

SIBU: The Pang Junan People’s Association (PJPA) is puzzled how a company is granted a timber licence that covers a large area in Ulu Ngemah, Kanowit.

He asserted that the area identified as Spali Ulu Ngemah Land District covering a total of 4,263 hectares of native customary rights (NCR) land belonged to members of the association.

“PJPA found out just recently from a community leader in Ulu Ngemah that a company would conduct its operation in Spali, Lakan, Junan, Ulu Ngemah up to Lanjak Entimau Wildlife Sanctuary in the area.

“We also found out that the company would bring its machinery to the area on Jan 4 next year.

“As the owners of NCR land in the area, we had never granted permission to such company and are strongly against the company running its operation there,” he said when met here yesterday.

He claimed that the persons who dealt with the company were not owners of the land affected.

Because of that, the association had lodged a police report on Nov 20 at Kanowit police station, he related.

“We were surprised to find out that the timber licence was still issued despite what Chief Minister Datuk Patinggi Tan Sri Adenan Satem had said on numerous occasions that there would be no more issuance of such licence,” he said.

Entili said PJPA members comprised 108 families who were originally from Ulu Ngemah area but were forced to resettle at Nanga Ngungun, Nanga Jagau and Nanga Sekuau Resettlement areas during the communist insurgency in the 1970s.

He said PJPA would seek the Chief Minister’s help on the matter soonest possible.

Meanwhile, Sarawak Forestry Department (SFD) director Sapuan Ahmad in a letter responding to the matter yesterday said the department “is only processing applications for areas which had been perimeter surveyed and gazetted as NCR officially by the Land and Survey Department and after obtaining the approval of all land owners.”

“The applicant is required to fulfil all the conditions laid down and send the supporting documents required by SFD based on the criteria and checklists before processing the application,” he added.

In this case, Sapuan said the applicant had received the support of the ‘ketua kaum’ and community leaders as well as local residents led by a ‘penghulu’ for the area.

He added the applicant had forwarded minutes of meetings, the approval letter by all land owners subject to gazette notice and certified copies of identity cards.

The applicant had also submitted a statutory declaration that all documents were complete and valid, and the document had been approved by the Commissioner of Oaths, he said.

He further said the area applied covering 4,800ha was under the jurisdiction of a community leader.

“The department has issued a licence to the applicant after reviewing all documents submitted.

“However, if there are protests or disputes from land owners or other residents, the department will suspend operations or revoke the licence,” Sapuan said.

Sapuan also said he had sent a copy of the letter to the Chief Minister’s Office.