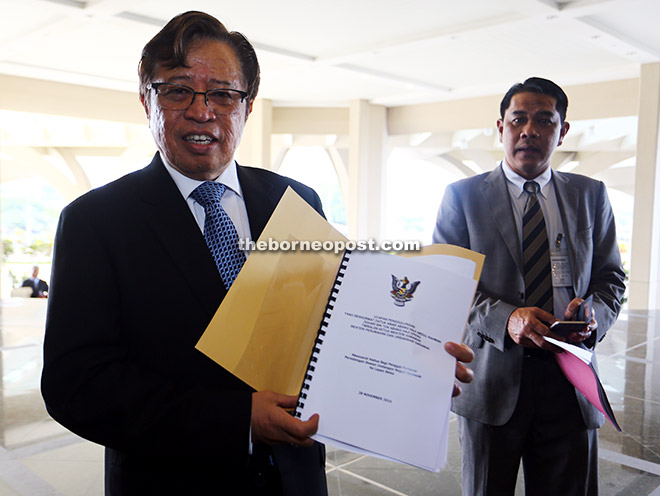 Abang Johari shows his ministerial winding-up speech to reporters upon bumping into them at the DUN Complex.

ONE of the factors drawing tourists to Sarawak is the state’s rich history, heritage and culture.

Tourism, Arts and Culture Minister Datuk Amar Abang Johari Tun Openg said the construction of the new Sarawak Museum Campus would once against put Sarawak museum back on the world map as among the best in the region in terms of collections such as ethnographic, archaeological, zoological and historical specimens.

“The construction of the new museum building is expected to be completed in 2018 and will be opened to visitors by 2020 once its displays and exhibits are put in place,” he said during his ministerial winding up speech at the State Legislative Assembly yesterday.

Abang Johari said conservation and upgrading works on old forts throughout Sarawak would be carried out under the 11th Malaysia Plan (2016-2020).

“Five forts will be conserved and upgraded into regional museums. Work on three of the forts will start in early 2017 and the remaining two will commence in 2018.”

He stated that the construction of the Santubong Archaeological Park which would incorporate the Wallace Centre would start in 2017, adding that this new product development would enhance the tourism attraction in and around Santubong Peninsular.

“To uplift the cultural aura of Kuching as the City of Unity and to provide a permanent venue incorporating the latest state of the arts facilities, and technology, the Old State Legislative Assembly (DUN) building will be converted into a performing arts centre.

“This will act as a centre for arts, music and dance enthusiasts to congregate and showcase their skills and talents. Consultancy work to upgrade the old DUN building will commence in 2017.”

Moving out from the city area, Abang Johari said the homestay programme which was becoming more popular, would be further enhanced in terms of capacity building and product diversification in line with the Community Based Eco-Tourism Stategy (CBET).

“The number of homestay operators has increased from year to year – 35 homestays and 515 operators have so far registered under this programme and a few more have undergone training and awareness programmes.

“As of September 2016, a total of 23,292 tourists visited the homestays bringing in an estimated revenue of RM3 million to the local community.”

He said events and festivals continued to lure both domestic and foreign tourists and at the same time providing business opportunities to the locals.

Abang Johari said the 19th edition of the Rainforest World Music Festival, which was held at Sarawak Cultural Village from August 5 to 6, was attended by a ratio of 63 per cent Malaysians to 37 per cent non-Malaysians with the highest percentage from UK, US, Australia and Singapore.

The spin-off to the economy was estimated at RM35 million, he added.

For the first time this year, he said Sarawak Tourism Board collaborated with Malaysia Association of Hotels (MAH) and Malaysia Shopping Malls Association to create activities for two months prior to the festival, which ensured that festivities were not centred around the Damai area only.

For the 20th edition in 2017, Abang Johari said his ministry would take a new approach in expanding and promoting the festival.

“More side events incorporating eco-friendly and greening initiatives within Kuching City will be organised in order to create a mood and atmosphere of musical festivities. Our ultimate aim is to engage and bring Kuchingites to have a feel and be part of the whole festival.”

He also said the third series of the Sarawak International Dragon Boat Racer, which was held concurrently with the Annual Sarawak Regatta from Nov 11 to 20, this year attracted 32 teams consisting of 946 paddlers from 11 countries.

Abang Johari said Kuching Waterfront was transformed into a festival and carnival centre during the period, with numerous side events such as the Sarawak and International Kitchen, Handicrafts Sales and Exhibitions, hawker stalls, water sports activities, musical and cultural performances were also organised in conjunction with the International Dragon Boat Race and Sarawak Regatta.

“The economic spin-off and income generated from the sales of foods, handicrafts and hawkers, accommodations and other services was estimated at RM1.4 million.”