Tuesday, June 15
You are at:Home»Features»Directive on timber licences flouted?

Approval of timber licences by Forest Department a mockery of CM’s fight against illegal logging, deforestation 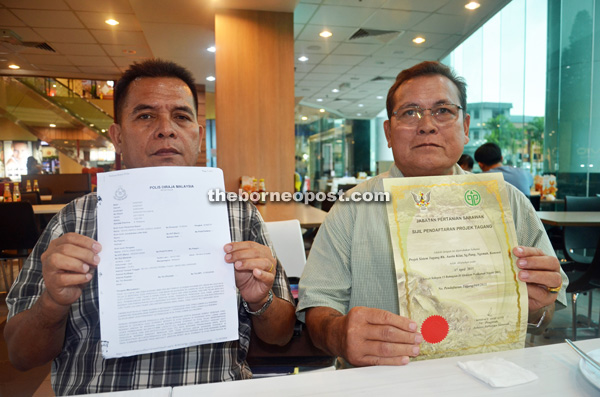 WHILE the government has declared in 2014 it will not issue any more new timber licences in an all-out effort to eradicate corruption and illegal logging in the state, the emergence lately of reports to the contrary seem to imply the directive has been flouted.

Despite the government saying it would not issue new timber licences or renew those upon expiry whereas the Sarawak Forest Department has reported that new logging permits – both OT(Occupation Ticket) licences and LA (Letter Of Authority) have been issued.

This has given rise to a lot of public confusion and also lent credence to suggestions that there are serious loopholes in the system that need to be urgently plugged.

A more effective monitoring mechanism has been proposed and in light of the reports of timber licences still being issued despite a total ban, the proposal should be given the serious consideration it merits.

And to recap, when Chief Minister Datuk Patinggi Tan Sri Adenan Satem announced in 2014 that the state government would not issue any more new timber licences in an earnest endeavour to curb corruption and illegal logging, the announcement was received by Sarawakians with much optimism and hope.

During the signing at Dewan Santapan of the State Legislative Assembly Complex on Nov 17, 2014, the Chief Minister clearly stated the government would not issue any more new timber licences and OT licences.

These were Adenan’s exact words at the event, quoted by The Borneo Post.

Amid rumour-fuelled anticipation of imminent state election, Adenan announced again on Feb 8, 2015, the state government had stopped renewing 67 occupation ticket (OT) licences — meant for felling of timber — in line with its commitment to wipe out illegal logging.

The Chief Minister said the figure was more than half the total number of OT licences in the state.

His exact words: “We have cancelled or not renewed 67 OT licences out of 100 over. Some already expired, and we will not renew (them) while some applied for renewal (and we did not approve). We reduced the number.”

SFD director Ahmad Sapuan also confirmed half the number of OT licences had been cancelled.

Of the 102 OT licences, 31 were held by Pelita Holdings Sdn Bhd, 26 issued under provisional lease (PL), 10 under alienated land, 12 for gazetted NCR land and 23 on land subject to NCR claim.

During the briefing, Sapuan spelt the criteria for the issuance of new OT licence and LA: approval by director of forests; title land, provisional lease and gazetted NCR land; land area size exceeding100 ha; planting plan or development plan; 100 per cent tree enumeration; submission of supporting documents such as minutes of JKKK meeting and consent letter which must be certified by Commissioner of Oath or Magistrate or District Office; approval letter from relevant development agencies and environment impact approval (EIA), if required.

While LA is not renewable, OT licence renewal requires the following items: approval of director of forests; EIA if required; the area forested; applicants who are not blacklisted; applicants without outstanding bills and merit system for renewal.

From Sapuan’s reports, one could not help but question why after SFD has turned down the renewal of 67 out of over 100 OTs, the figure still came back again to 102 OT and LA in January 2016?

Adenan seemed to be totally oblivion about the latest figure.

On January 14, at a dinner in conjunction with the meeting of Environment Ministers and State Executive Council Members Responsible For Environment (Mexcoe) at Damai Puri Resort and Spa, the Chief Minister announced Sarawak had got rid of the “disease” of illegal logging due to the state government’s effort in curbing the unlawful practice.

“I think we have got rid of this “disease.” Before this, there was no raid conducted. People could do any how they wanted, stealing timber left and right as if it belonged to their grandmother.

“Almost every day, there is a raid and I have halved the number of occupation ticket (OT) licences because they used this licence to steal timber left and right, with the cooperation from some forest officers who pretended not to know. They don’t work in their own area,” he said.

From Adenan’s speech, it was clear he still believed that OT had been halved while according to Sapuan, as of Jan 12 2016, there were still 102 valid OT and LA.

Guidelines on issuing licences not followed

Coincidentally, some reliable sources revealed between 2015 to 2016, about 30 OT were newly issued or renewed and 30 LA were granted.

It also revealed the present SFD did not follow the guidelines of issuing OT and LA, alleging there were times land of more than 100 ha weregrantedto LA while land of less than 100 ha were grantedto OT.

In view of the situation, one cannot help but ask has Sarawak been successful in combating corruption and illegal logging as claimed by Adenan?

The new case on Nov 24 this year, involving the land of Pang Junan People’s Association (PJPA) in Kanowit, gave Sarawakians reason to have a second thought.

PJPA members, comprising 108 families, were originally from Ulu Ngemah area but forced to resettle at Nanga Ngungun, Nanga Jagau and Nanga Sekuau Resettlement areas during the communist insurgency in the 1970’s.

PJPA had resorted to contacting the media after a timber firm obtained a licence to fell tree in their land in Ulu Ngemah, Kanowit.

The area, identified as Spali Ulu Ngemah Land District, covering a total of 4,263 hectares of native customary rights (NCR) land belong to members of the association.

Spali, Lakan, Junan, Ulu Ngemah up to Lanjak Entimau Wildlife Sanctuary in the area. We also found out the company will bring its machinery to the area on Jan 4 next year.

“As NCR land owners in the area, we have never granted permission to such company and are strongly against the company operating there,” Entili Garaji told the media on Nov 23.

He claimed the persons dealing with the company were not owners of the land affected and the community had, thus, lodged a police report in the hope an investigation would be initiated.

Before he brought the case to the public, Entili, in the company of community leader Ngemah Ili and Penghulu Ambrose Pengiran Sampai, had sought advice and clarification from the Forestry Department’s Sibu Regional Office on the matter.

He was surprised to find out that timber licences were still being issued despite what Adenan had said on numerous occasions that such licences would no longer be given out by the government.

Doubts over validity of stakeholders’ consent

In response, Sapuan said the department “is only processing applications for areas which have been perimeter-surveyed and gazetted as NCR land officially by the Land and Survey Department and after obtaining the approval of all land owners.”

This is not true. There are confirmed cases where other stakeholders are not involved while the perimeter-surveyed was being carried out leading to confusion, conflicts and distrusts among parties concerned.

Sapuan added that the applicant was required to fulfil all the conditions laid down and submitted the supporting documents required by SFD based on the criteria and checklists before processing the application, and in this case, the applicant had received the support of the ketua kaum or community leaders as well as local residents, led by a penghulu for the area.

He also said the applicant had forwarded minutes of meetings, the approval letter by all land owners, subject to gazette notice and certified copies of identity cards. The applicant had also submitted a statutory declaration that all documents were complete and valid, and the document had been approved by the Commissioner of Oath, he pointed out.

Sapuan said the area applied for, covering 4,800ha, was under the jurisdiction of a community leader and the SFD had issued a licence (presumably OT) to the applicant after reviewing all documents submitted.

“However, if there are protests or disputes from land owners or other residents, the department will suspend operations or revoke the licence,” he added.

It raised questions whether the existing conditions are too lax or there is no check balance in ascertaining the validity of the consent thus leading to doubts over the legality of  the whole process.

Entili’s surprise is shared by many Sarawakians. While we all have believed things are getting better, the SFD’s figures seem to show otherwise. 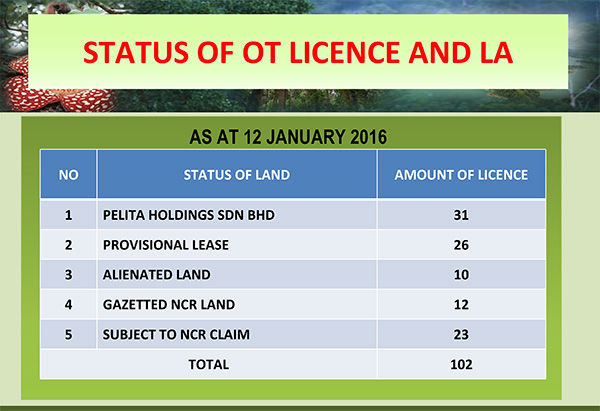 It is, thus, the wish of the people in the state to call to Adenan’s attention what is really happening on the ground and for the state government to come out with a more effective mechanism to safeguard the rights of land owners and also protect the whole timber industry.