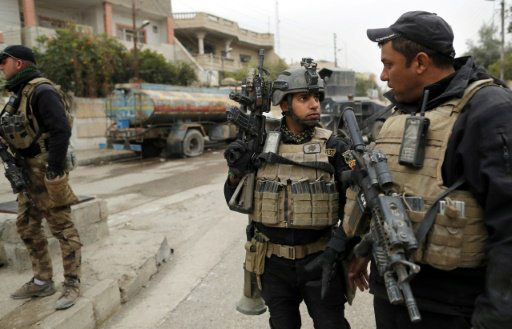 Soldiers from the Iraqi special forces secure a street in the Al-Bakr neighbourhood of Mosul during an operation against Islamic State (IS) group jihadists on November 30, 2016 -AFP photo

BAGHDAD: Forces from the Iraqi army retook four villages from the Islamic State group northeast of the city of Mosul on Saturday, the Joint Operations Command said.

The recapture by the army’s 16th division of the villages between Bashiqa and Mosul clears the way for Iraqi forces to enter the city from the northeast.

“The army’s 16th division liberated four villages on the northern front… and raised the Iraqi flag on buildings after defeating the enemy,” a statement said.

Tens of thousands of Iraqi forces launched a massive operation to retake Mosul, the jihadists’ last major bastion in Iraq, on October 17.

The main push has come from the east, where elite forces from the Counter-Terrorism Service have retaken several neighbourhoods despite fierce resistance. -AFP